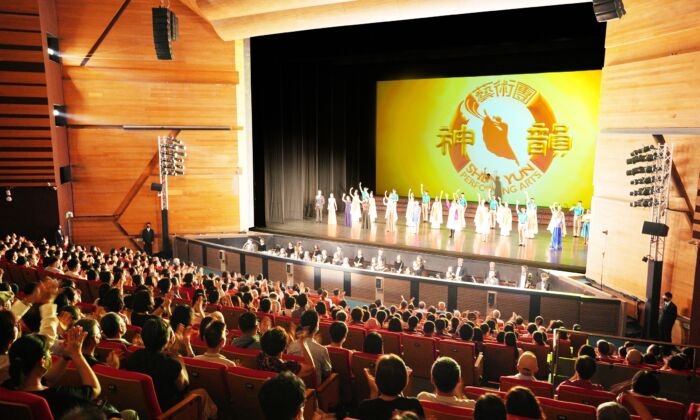 TAICHUNG, Taiwan—Although June 29 was a working day, it didn’t stop Shen Yun Performing Arts from filling the house in the afternoon and evening as art professionals and business people brought their families, staff, and friends to attend.

“Wow! The entire venue is full and there are no empty seats. Today’s performance went very well,” said Li Hsun-Ming, president of the Taiwanese Chamber of Commerce in Central and Latin America. He felt “the loving-kindness in human nature” from the performance.

This was Mr. Li’s first experience with Shen Yun. After the performance, he expressed that “there is a divine power protecting human beings” and “people can’t do things that are against the conscience of God.”

Mr. Li said that he was particularly moved by one of Shen Yun‘s dance dramas, set at a military hospital in mainland China. “How can human beings use money to buy human organs! It’s not right! I feel very sad about this. The dance tells us that people just have to be good and honest and not to do things that are against our conscience, only then can we have peace in this world and humans can live happy and joyful lives.”

Chung Ho-kuang, chairman of the Southern Brick Company, traveled from Kaohsiung to attend the performance. He said that from the dynamic backdrop to the body language of the artists, “everything is very profound and penetrating, all the techniques were top-notch. By watching the show, I feel that I’ve seen so much and have been enriched spiritually as well.”

Mr. Chung said: “[Shen Yun] is a force that leads to goodness,” and the entire performance “has a strong positive energy that lifts people’s spirits,” which he believes is helpful to people and society after having been through more than two years of pandemic restrictions. He emphasized that Shen Yun “can lead people to positive development in all aspects.”

Shen Yun Helps Pass on the Legacy of a Lost Culture

Huang Chin-tsai, chief of ceremonies of the Lions Clubs International 300-G1 District, watched Shen Yun for the second time. He marveled at the wonders of classical Chinese dance.

“This is critical to ensure a lost culture is being passed on to future generations. Each performer is highly skilled and is able to bring [traditional Chinese culture] into full play. This is a miracle,” said Mr. Huang.

Wang Chih-shao, a real estate company general manager, was impressed by Shen Yun. After watching the performance in the evening, he said: “This is not only a visual treat but a feast for the soul—it’s extraordinary!”

Mr. Wang added that it is everyone’s responsibility to carry forward the good aspects of Chinese culture, “especially the spiritual and artistic aspects of Shen Yun, are something we must come to value.”

Shen Yun Shows the Beauty of the Arts

“As soon as the show began, I felt so moved that I just wanted to cry,” said Li Shih-hua, a company director in Taichung.

Thinking back to the last time she experienced Shen Yun, Li recalled: “In the past six years, I saw that Shen Yun was loved by audiences all over the world. This year, watching Shen Yun with my children is a wonderful feeling, it also brought me peace.”

“All of the physical movements, expressions, and costumes they [the performers] presented made us appreciate the cultural heritage of China’s 5,000 years,” Ms. Li commented.

“Through Shen Yun’s effort to pass on this legacy, more people will come to know how beautiful this art is and how meaningful this performance is.”

Ms. Li proudly said that her son has told her that he would like to see Shen Yun next year, proving that “Shen Yun’s positive energy can affect people, whether it is an adult or a child.”

Ms. Li deeply hopes that “such positive energy can be passed on to audiences all over the world.”

Reporting by Epoch Staff in Taichung.