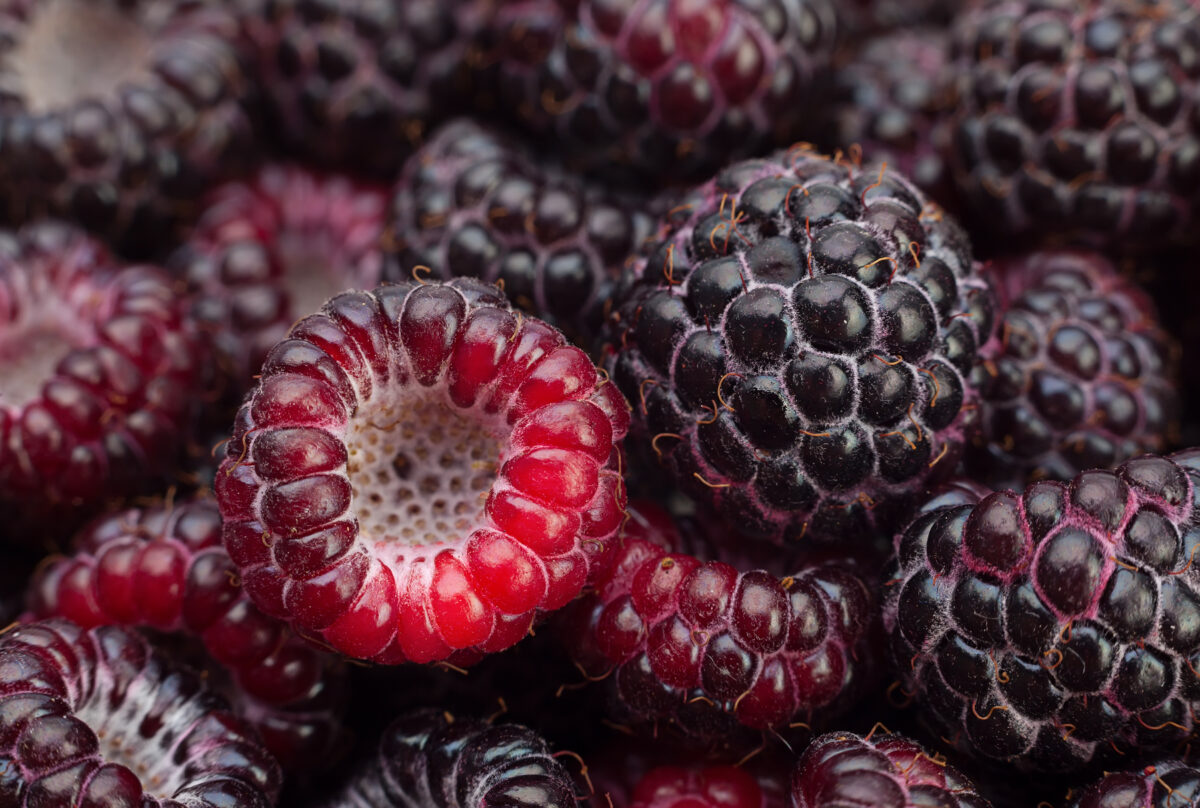 By Lepas/Shutterstock
Food as Medicine

Black raspberries, when compared to more well-known red raspberries or blackberries, may surprise you for their sweet delicious taste as well as their strong health properties

Black and red raspberries are varieties from the same Rubus family so their nutritional contents, such as calories, proteins, fiber and vitamins, are the same.

However, some components of black raspberries are completely different compared to the red variety — they have a 10-fold increase in anthocyanins, nearly double the amount of ellagic acid and three times the antioxidant power, measured by their oxygen radical absorption capacity (ORAC) — their ability to absorb free radicals (Table 1).[i]

Blackberries are unique because they have almost three times the vitamin K level as both raspberry varieties (see Table 1 for the differences between black raspberries, blackberries and red raspberries).

Antioxidants have been shown to fight cancer, heart disease and age-related decline.[ii]  Anthocyanins, which give the black raspberry its rich dark purple color, protect against oxidative stress and are natural antioxidants.[iii] In addition to their antioxidant properties, black raspberries have chemopreventive, anti-inflammatory and neuroprotective[iv] effects and can lower the risk for breast[v] and colorectal cancers[vi] and cardiovascular diseases.[vii],[viii]

Common oral squamous cell cancers are found in the mouth, pharynx and esophagus. In a study of mice with tobacco smoke toxin-induced oral cancer, the group given 5% dietary black raspberry had significantly lower levels of DNA damage in the oral cavity and oral tumors decreased from 70% to 46.7%.[x]

Anti-apoptotic and pro-inflammatory biomarkers for oral cancer were significantly reduced following freeze-dried black raspberry powder oral administration in a daily dissolvable lozenge for approximately two weeks in 30 patients who had been diagnosed with oral cancer and were scheduled for oral surgery.[xi]

In a carcinogen-induced study of oral cancer in hamster cheek pouches, hamsters were topically treated with freeze-dried black raspberry solution for 12 weeks and had significantly reduced multiplication of squamous cancer cells (41%), tumors (37%) and cell proliferation rate (nearly 7%), showing its prevention potential for oral cancer in humans.[xii]

In a trial of 20 Barrett’s esophagus patients administered black raspberries, either 32 grams (g) or 45 g for six months, the black raspberry treatment significantly reduced lipid peroxidation — linked to oxidative stress and free radical damage and significantly increased GST-pi levels, a marker of detoxification — in 55% of the subjects, thus being helpful in preventing progression to esophagus cancer.[xiii]

Freeze-dried black raspberries, and their components of anthocyanins and protocatechuic acid, were administered to carcinogen-induced esophageal cancer rats and all three treatments were found to inhibit the cancer by decreasing the proinflammatory and anti-inflammatory cytokines and increasing immune cell trafficking into the tumor tissues.[xiv]

In an induced oral cancer mouse model, black raspberry extract demonstrated a strong cancer prevention ability by inhibiting the effects of the carcinogen and repairing bulky lesions in mouse DNA.[xv]

Researchers found that dietary anthocyanin and berry consumption were associated with a 15% and 18% reduction, respectively, in Type 2 diabetes risk.[xviii]  Similarly, in a meta-analysis of 23 studies, berries were highly effective in lowering risk for Type 2 diabetes.[xix]

The use of black raspberry in the form of dried powder capsules significantly lowered 24 hour and nighttime systolic blood pressure compared to a placebo in a study of 45 prehypertensive patients during eight weeks of treatment.[xx]

Mice were fed a high-fat diet to induce hyperlipidemia and orally administered black raspberry extract as a treatment and rosuvastatin, a cholesterol synthesis inhibitor, as a control. Black raspberries normalized immune processes, lymphocyte proliferation and cytokine production and decreased the elevated serum tumor necrosis factor and total cholesterol, making it an effective natural alternative comparable to the statin control drug.[xxiv]

Administration of black raspberry extract in a prostate disease-induced rat model effectively inhibited osteoporosis (prostate patients have increased risk for bone loss) by altering the activation of osteoblasts and osteoclasts.[xxv]

Black raspberry vinegar was tested as a treatment (low dose and high dose) against alendronate (a postmenopausal osteoporosis drug) and no treatment groups in an ovariectomized rat model.

Compared to the placebo, the low and high dose black raspberry vinegar groups showed positive effects on estrogen regulation and were comparable to the effects of the alendronate treatment. Black raspberry vinegar is recommended as an effective non drug alternative for the prevention of osteoporosis in postmenopausal women.[xxvi]

Using an in vivo mouse model of induced-contact hypersensitivity, black raspberries or their anthocyanin components were added to their diet. Both fruit-based supplements improved symptoms such as swelling, rash, redness, itching and skin patches caused by the skin inflammation and are potentially safer than current steroid dermatitis treatments.[xxvii]

Black raspberry extracts were tested for their anti-inflammatory effects and results showed that three anthocyanin components were key to controlling inflammation. They suppressed inducible nitric oxide synthase (balances the free radicals in your body), tumor necrosis factor and interleukin expressions (regulators of inflammation), which explains the health benefits of the extracts in inflammatory diseases.[xxviii]

Diane Fulton
MD
Follow
Dr. Diane Fulton is a professor emeritus at Clayton State University. She holds a Ph.D./MBA in business (University of Tennessee–Knoxville) and a bachelor’s with math/secondary education majors (University of Wisconsin–Milwaukee). During her 45-year career as an administrator/professor teaching research and business, she authored 10 books, over 50 articles, and is now writing children’s books about the body, mindfulness, and cross-cultural awareness. Her passion is to share her knowledge to integrate a healthy body, mind, and soul. This article was originally published on GreenMedinfo.com
SHARE
Friends Read FreeCopyFacebookTweet
You May Also Like