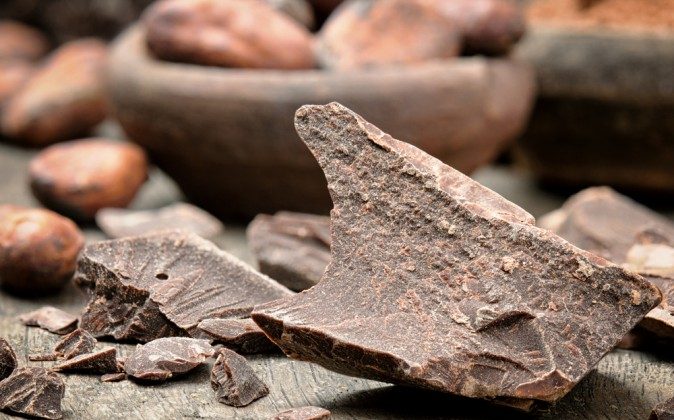 A considerable number of studies are in agreement that dark chocolate has pronounced health benefits—provided you eat it in moderation (one to two ounces is recommended by some researchers).

The same cannot be said for milk chocolate, however. There’s a big difference between your average chocolate bar and what could be referred to as “therapeutic” chocolate. To understand this better, here are some definitions:

Cacao is naturally high in antioxidants and other natural compounds that are beneficial for cardiovascular health and weight management. In all, about 40 distinct health benefits have been linked to dark chocolate

Knowing the meaning of these terms is important, because if you think you’re improving your health by eating typical milk chocolate candies, you’re fooling yourself.

Cocoa and cacao is typically quite bitter, and rarely fancied by self-proclaimed chocolate lovers, who are really craving the sugar added to most chocolate bars and candy.

That said, certain types of dark chocolate, as well as raw cocoa powder and cacao, are powerful superfoods, ranking among the most anti-inflammatory and antioxidant-rich foods known to mankind.

Interestingly, recent research has shed new light on the mechanism that makes cocoa powder (and dark chocolate) so beneficial for your heart and blood vessels. These benefits, it turns out, are largely dependent on the action of beneficial bacteria in your gut.

Research presented at the National Meeting & Exposition of the American Chemical Society (ACS) claims to have unraveled the precise reason why dark chocolate is so beneficial.

While it’s known that cocoa powder is rich in potent antioxidants called polyphenols, it was thought that these molecules were poorly digested and absorbed due to their large size.

Researchers have now discovered that certain bacteria in your gut actually break down and ferment the components in dark chocolate, turning them into absorbable anti-inflammatory compounds that benefit your health.

In particular, beneficial microbes including Bifidobacterium and lactic acid bacteria like to “feast” on cocoa, according to the researchers. The microbes also break down the fiber found in cocoa powder, turning it into highly absorbable short fatty acid chains that promote satiety.

The study, which involved three cocoa powders tested in a model digestive tract, may help explain why chocolate has been found to be so good for your heart, as the anti-inflammatory compounds may reduce inflammation of cardiovascular tissue. The study’s lead author explained:

“[W]e found that the fiber is fermented and the large polyphenolic polymers are metabolized to smaller molecules, which are more easily absorbed.

These smaller polymers exhibit anti-inflammatory activity… When these compounds are absorbed by the body, they lessen the inflammation of cardiovascular tissue, reducing the long-term risk of stroke.”

Previous research has also shown that eating dark chocolate may help promote gut health by selectively feeding beneficial bacteria, as opposed to harmful ones. It essentially acts as a probiotic, thereby promoting a healthier gut microbiome.

As mentioned, a number of previous studies have found that dark unprocessed raw cacao helps reduce your risk for cardiometabolic disorders, including:

One meta-analysis published in 2011 found that those who ate the highest amounts of dark chocolate had a 37 percent reduced risk for cardiovascular disease and a 29 percent lower risk for stroke, compared to those who consumed the least.

Small amounts of dark chocolate may also reduce your risk of heart attack because, like aspirin, it has a biochemical effect that reduces the clumping of platelets that causes blood to clot. Platelet clumping can be fatal if a clot forms and blocks a blood vessel, causing a heart attack.

Researchers also discovered that a flavonoid compound in dark chocolate called epicatechin may protect your brain after a stroke by increasing cellular signals that shield nerve cells from damage.

Another way raw dark chocolate may provide cardiovascular benefit is by assisting with nitric oxide metabolism, as described by Ori Hofmekler. Nitric oxide protects your heart by relaxing your blood vessels and thereby lowering your blood pressure.

However, nitric oxide production produces adverse reactions and toxic metabolites, which must be neutralized by your body so they don’t result in oxidative damage to your blood vessel lining (by peroxynitrite oxidation and nitration reactions). Cocoa polyphenols protect your body from these metabolites and help counter the typical age-related decline in nitric oxide production.