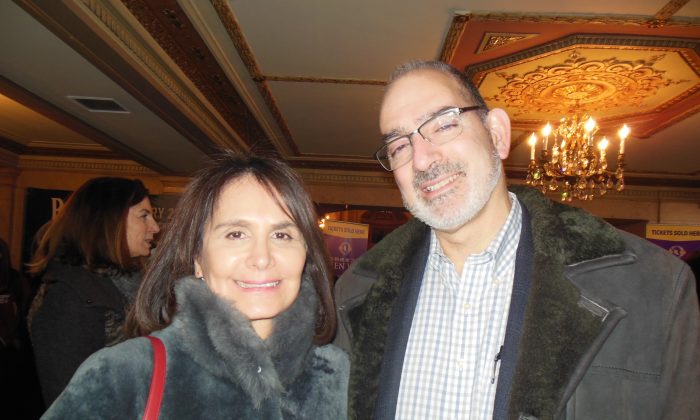 BOSTON—Shen Yun performed at the Boch Center Wang Theatre on Jan. 26, and Gregory Kechejiam and his wife, after having Shen Yun recommended to them, watched the curtain open.

Mr. Kechejiam, a surgeon at Beth Israel hospital in Milton, said that Shen Yun Perfoming Arts was spectacular, and exceeded the couple’s expectations.

“We loved it,” added his wife, Fahti Kechejiam, who owns and operates Centerpeace Events, an event design company.

“It came highly recommended,” said Mr. Kechejiam, “and my wife, Fathi, several months ago knowing it would be popular, secured tickets. Although expensive, worth every penny. Magical.”

“I love the dancers,” said Mrs. Kechejiam. “I love the story, and I love the combination of the animation in the back and the reality, the real thing that was going on the stage, and the collaboration was amazing. I thought it was very, very good.”

New York-based Shen Yun has invented and patented an animated backdrop specifically for their performances. Performers seem to step in and out of distant or ancient lands. It’s a unique feature of a Shen Yun Performing Arts production.

Another unique feature of Shen Yun is its Eastern and Western orchestra, which Mr. Kechejiam appreciated.

“The music was spectacular,” he said. “Having the live orchestra there, both with western and traditional Chinese instruments was very special. You could hear that. It brought the performance alive, very much so.

Each piece of music that Shen Yun’s orchestra performs is composed for the story being told, whether it is about people in Tibet, Mongolian horsemen, an emperor of the Tang dynasty, or other peoples and cultures throughout China’s 5,000-year history.

Mr. Kechejiam said, “I also enjoyed very much the fact that among the dozen or so performances, there was representation of different parts of China, respecting the very diverse heritage that the Chinese people have.”

Shen Yun was started in 2006 in New York after a group of Chinese artists came together to revive China’s traditional culture, the essence of which has not been allowed to be expressed in China since 1949, when the communist party took control of the lives in China. Though empires rose and fell throughout the 5,000 years, the history and culture had been passed down continuously through the millennia. Values such as loyalty, compassion, and piety both filial and divine, were intrinsic to the culture.

The Kechejiams said it was important to preserve heritage and tradition as Shen Yun performers endeavor to do.

Mr. Kechejiam said, “Knowing your roots and having strong roots, and identifying it gives you a ground to grow.”

“A big mighty oak tree has to have very strong roots. And China is a very strong mighty country for millennia. And you can see why. Because the people respect the roots and their origin. No country, particularly as great as America or China can lose that,” he said.

With reporting by Sherry Dong and Carrie Gilkison.