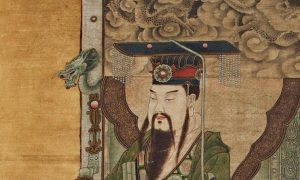 Gods of the Chinese New Year
0 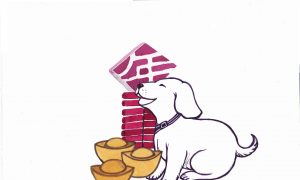 An Introduction to Chinese New Year 2018: The Year of the Dog
0 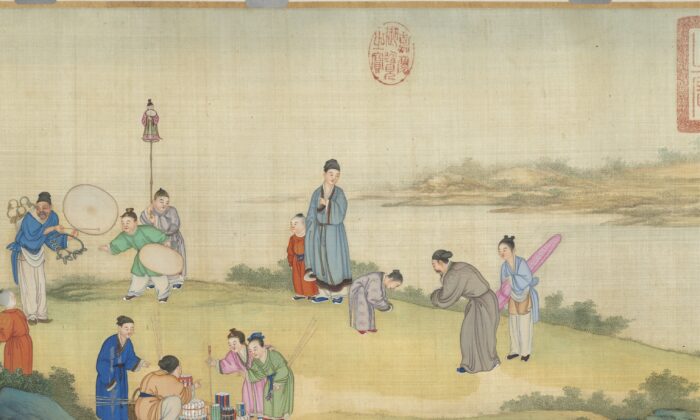 The joyful sounds of firecrackers and laughter fill the air as millions of families engage in festivities to celebrate the new year. Beginning on the first day of the lunar calendar, Chinese New Year is one of the most widely celebrated holidays in Asia. It traditionally symbolizes the removal of evils and misfortunes, as well as the welcoming of hope and prosperity.

Fireworks are used to scare away evil spirits, while families hang New Year couplets, images of family guardians, and auspicious characters on their front doors to avert bad luck. People don their finest new clothes—typically in red, a lucky color—and gather with loved ones to indulge in delectable meals.

Among the many traditions used to celebrate Chinese New Year, a lesser-known one is the custom of enjoying New Year paintings, also known as “Sui Zhao” paintings. These paintings originated in the courts of the Song Dynasty and were created by royal court artists for the enjoyment of the nobility. Due to their elegance and expressiveness, they became a tradition that was passed down throughout dynasties to come.

There are traditionally two types of New Year paintings. One depicts dynamic scenes of celebration and symbolizes the replacement of the old with the new. The other is more similar to Western still-life art; these paintings typically depict vases of flowers, bowls of fruit, and antiquities as symbols of good fortune and prosperity. These artworks offer us valuable glimpses into ancient Chinese culture and traditions.

Ding Guanpeng was an artist who served the court in the Qianlong era. He was known for his paintings of Buddhist and Daoist figures, and often incorporated Western methods of perspective in his works. His painting titled “Spring Market at Peace” and created in 1742 under the Qianlong Emperor, depicts a cheerful scene of people in the countryside celebrating the new year. Various traditions and customs can be observed; fellow countrymen greet each other with deep bows, a merchant sells fireworks, and a performer beats on peace drums. Meticulous shading gives the painting a vivid, lifelike effect.

Traditionally, several generations of a family lived in one residence known as a “siheyuan,” or courtyard house. These homes are centered around an open yard surrounded by rooms on all four sides. On New Year’s Day, every family’s courtyard has a happy and festive atmosphere. Yao Wenhan’s “A Celebration of Chinese New Year” was created in the Qing Dynasty and depicts a large family celebrating the Chinese New Year.

In the painting, several elders sit in the front hall, leisurely chatting and watching the children play. The children are engaging in a variety of celebratory activities—from lighting fireworks, to frolicking, to playing various games and with silk puppets. The figures are all dressed in brightly colored clothes, as was customary during New Year’s.

The artist paid an extraordinary amount of attention to detail. The children’s figures are lively and childlike, rich in color and full of festivity. Two children can be seen squatting on the ground, smiling as they count a basket of colorful firecrackers. Another boy in red is holding incense, carefully approaching the firecrackers on the ground, while the child in green covers his ears, looking over his shoulder with nervous excitement.

Judging from the lit firepot, the family may have just completed a spiritual ceremony. According to Chinese folk custom, on the 24th of the 12th lunar month, the gods will rise and return to the heavens to report back to the Jade Emperor. Therefore, on this day, people hold a “god sending” ceremony.

The stunning silk tapestry titled “Bird-and-Flower Painting to Celebrate New Year” by Song Kesi is an elegant celebration of life. In it, a pair of babblers and pheasants frolick among blooming plum blossom branches. Traditionally, Chinese artwork containing flowers and birds weren’t created merely to depict the subjects as realistically as possible; instead, artists often expressed their own thoughts and feelings through the subjects. Birds depicted in pairs often symbolize the combination of yin and yang, and represent family harmony.

Traditional Chinese New Year customs are deeply infused with ancient beliefs in the gods and the heavens. People in ancient China treated life with humility; for instance, if there was a good harvest, it would be considered a result of the gods’ blessings for doing good deeds. The ancients believed that there was a god dedicated to every aspect of life, and they were all to be devoutly worshiped. Therefore, an important part of New Year ceremonies was to express respect and gratitude to the gods for all their blessings.

This article is republished with permission from Elite Lifestyle Magazine.