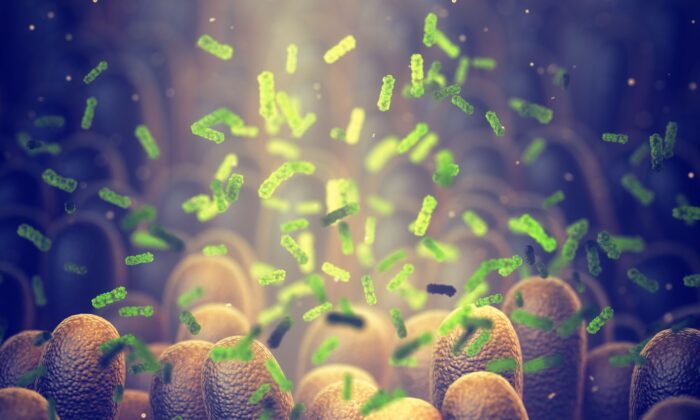 Microbiome in the gut interacting with the villi lining the small intestines. (nobeastsofierce/Shutterstock)
Health News

Study Answers Why Not All Obese People Develop Diabetes

A study by Oregon State University may have found a reason behind why some obese people develop type 2 diabetes but not all, indicating a difference in gene activity as well as modulation by a bacteria called Oscillibacter valericigenes (OV).

The team’s study suggests that the activity of a gene named Mmp12; a gene regulated by the microbiome in the gut and activated by consumption of a high-fat, high-sugar diet, is directly related to whether an obese person gets diabetes or not.

It is regulated by the microbe OV, which proliferates under a high-fat-high sugar diet and “causes an increase of insulin-resistant” fatty immune cells in the body.

To investigate the causes behind T2D, researchers tested mice models to determine the link between a high sugar and fat diet, gut microbiota (microorganisms that live in the gut), and diabetes.

Type 2 diabetes occurs when the body becomes unable to recognize a hormone named insulin, a molecule that signals to cells to take up blood sugar into fat, muscle, and liver cells when blood sugar is high.

The disease can be caused by an array of reasons, obesity and a high sugar and fat diet are some of the reasons. T2D is first preceded by glucose intolerance; indicated by high blood sugar due to cells becoming unresponsive to insulin.

The team divided mice into two diets; one half ate a high sugar and fat diet, whilst the other half set as control consumed a normal diet. Mice in the two groups were then raised in either germ-free conditions [having no microbes and gut flora at all] or in conditions where germs are present but not microbes that cause disease and ill-health.

After eating 8 weeks of the high sugar and fat diet, the mice in the group that had germs all showed symptoms of diabetes, including insulin resistance and glucose intolerance; but mice on the same diet that were germ-free did not, indicating that presence of microbiota played a role in the mechanism that led to the conditions.

Examining the different organs between the groups, the researchers found that the diet impacted fat cells the most; with the most changes to their gene activity when compared to the control groups.

Researchers also observed that an important mitochondrial pathway that regulates the conversion of blood sugar to energy was damaged in these fat cells.

The researchers identified Mmp12 as the key gene behind the damage to the mitochondrial pathway. They found the gene interacted with fatty immune cells that also cause inflammation and stress to fat cells, further exacerbating symptoms.

Most importantly, this gene can be activated by a high sugar and fat diet both in humans and mice.

When Mmp12 was suppressed or deleted, researchers observed improved health in glucose-intolerant mice.

Screened in humans, individuals that were obese but not diagnosed with T2D had lower expressions of Mmp12 as compared to those with T2D where the genetic interaction was over-activated.

The team also compared different bacteria against the gene to see if microbiota activity played a part in gene activity and found that OV was the likely answer as supplementation of the bacteria increased Mmp12 activity and also worsened glucose intolerance symptoms in mice.

Despite finding a causal relationship in a key T2D-driving mechanism, the researchers speculate that OV is unlikely to be the only microbial regulator for the gene; and even the Mmp12 pathway, though instrumental, may not be the only pathway that causes T2D.

The researchers suggest that “alternative pathways” may still exist, and they may be triggered by other microbes in the gut.

“We previously showed that Romboutsia ilealis worsens glucose tolerance by inhibiting insulin levels, which may be relevant to more advanced stages of type 2 diabetes,” Shulzhenko said.

“Our work sheds light on the one of most enigmatic phenomena in the field of T2D, potentially explaining why some patients with obesity develop diabetes while others do not,” the authors concluded.

The study was published in the Journal of Experimental Medicine on June 3, a peer-reviewed scientific journal.