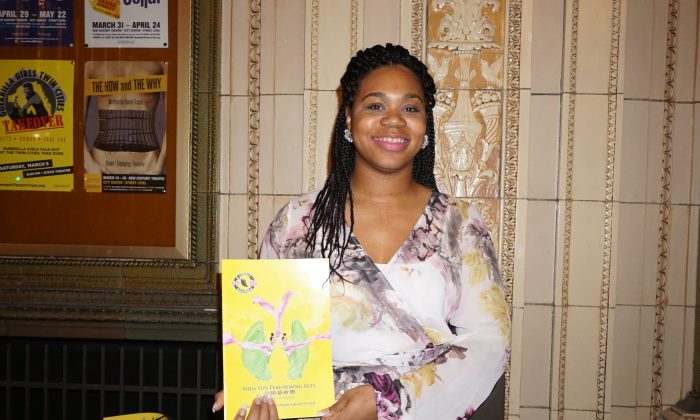 MINNEAPOLIS—Jewlene Bellamy studies fashion and business management. After seeing Shen Yun Performing Arts at the Orpheum Theatre on the evening of Feb. 20 she commented, “It was like fashion in motion, it was wonderful.” Beyond her appreciation of how the beauty of the costumes worked flawlessly with the dance, Ms. Bellamy found a joyful, deeply meaningful experience.

“The dancers were dynamic. I loved how, the way they dance, it had so much grace, and class and emotion, that it just told the stories. It was just wonderful,” she said.

She felt the dancing was pure and graceful. “I was in awe,” she said. “I wanted to scream and yell, but you know, I had to hold it in.”

“When it was time to clap and whew, then did it, you know but I was just busting with joy,” Ms. Bellamy said. “You know it was amazing and incredible, and I learned a lot from it.”

From the fashion perspective, she said the color combinations were intricate. She felt it was amazing the way the colors glistened with the dancers’ movements in a unique way.

“When they moved around it looked like flowers,” Ms. Bellamy said. “It was beautiful to me, and then the men were amazing too, because they moved gracefully as well.”

Falun Dafa is a meditation discipline that focuses on the guiding principles of truthfulness, compassion, and tolerance. Since 1999, it has been brutally persecuted by the communist regime in Mainland China.

Ms. Bellamy knew a little bit about Falun Dafa and how it was being persecuted before coming to see Shen Yun. She remembered when she lived in New York in the early 2000s seeing some silent protests.

“I can definitely relate to that as far as standing [to] hold to your beliefs when everybody else is doing something else, and being persecuted for what you believe in,” she said.

In one of the pieces of the program that depicts the ongoing persecution of Falun Dafa practitioners, she was saddened by how some of the practitioners lost their loved ones, but she felt strengthened and hopeful when those that maintained their belief were redeemed by an angelic figure descending from heaven.

“I can definitely relate to that,” she said. “And that strengthened me, especially the vocalist, when they said something to me about living with a purpose, and being taken away from your heaven you know, from your creator, don’t let the wealth and the material and anything else distract you.”

Ms Bellamy felt the overall performance was very touching. “I couldn’t get enough, and I was like: ‘Oh my God, it’s over already,’ and it makes me want to definitely research what Falun Dafa is.”