Student of Chinese Dance of Shen Yun: ‘I don’t want the show to end’ 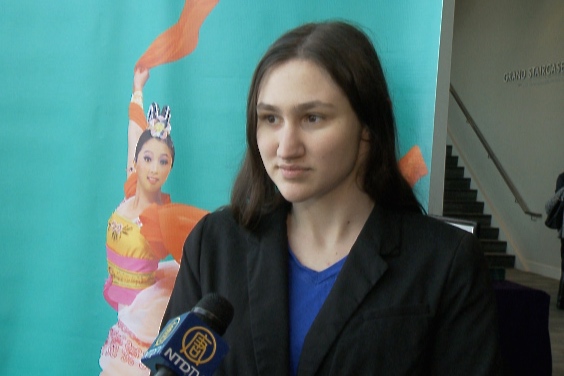 AUSTIN, Texas—High school student Adina Friedman first heard about Shen Yun four years ago. She had already started learning Chinese dance back then and she begged her parents to take her to see Shen Yun. Now for the last four years Adina has come to see Shen Yun when the company performs in Austin. She caught Monday’s Dec. 29 performance at the Long Center For The Performing Arts.

“It really inspired me,” Adina said. Adina said that watching the performance over the years “has helped me a lot to be better myself in dancing. The main thing that it has taught me is try to make everything look effortless and very light.”

Shen Yun performs both classical and ethnic Chinese dance, bringing to life many of China’s minority groups from around China.

“It makes me very happy because it is so beautiful, and it’s always nice to see beautiful things,” said Adina.

She is also trying to take her dancing to the next level—working to more deeply incorporate her character’s inner motivation into every movement.

Adina explained that she’s working on “figuring out the intention of why you are moving the way you are. Why a move is happening and not just when it’s happening. “

Adina said she studied ballet for a while but later switched to classical Chinese dance. She found she liked it better and found it more fulfilling. And there are more opportunities to perform.

Adina said she also enjoys the singing performed in addition to the dance.

“The singers blow me away. I will actually get chills running down my spine. Wow!”

“The music feels very earnest and very sincere, and singers are able to convey that beautifully,” said Adina.

“This is really a sad moment for me, I don’t want to go home. I didn’t want the show to end,” said Adina.