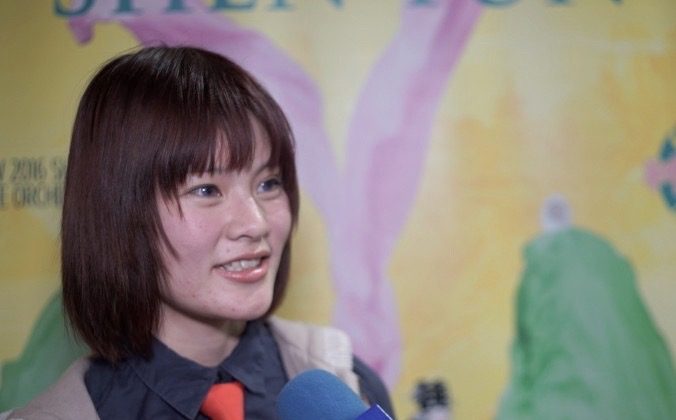 Ms. Liu felt "an underlying enormous energy that is unlike anything I've felt before" in Shen Yun Performing Arts in Ogden, Utah, on Dec. 26, 2015. (Courtesy of NTD Television)

OGDEN, Utah—New York-based Shen Yun Performing Arts was formed to revive the divinely inspired traditional Chinese culture, and it is banned in China.

The current communist regime, officially atheist, has sought to suppress and destroy the traditional culture. So for ten years, Shen Yun has toured the globe without making a stop in China.

Thus, it is not uncommon to see artists and other people from China come especially to a Shen Yun performance overseas when they have the opportunity. In China, the only glimpse they have of Shen Yun is from a limited run of DVDs of a season’s performance.

Ms. Liu, a student from China, had seen the DVD, but it was nothing compared to seeing it live.

In the theater, I can feel the energy stemming from compassion and serenity.
— Ms. Liu

“In the theater, I can feel the energy stemming from compassion and serenity,” Ms. Liu said.

She felt a calming energy flowing through her veins.

“Not just tranquility, serenity, harmony and peace, but also an underlying enormous energy that is unlike anything I’ve felt before,” she said. “It is completely different from the China we know.”

Their outward expressions come from within and they are very natural and pure.
— Ms. Liu

There is a difference in the Shen Yun dancer’s movements, Ms. Liu said. “Their movements are vivid because they are completely happy, brimming with freedom, and their movements are not restricted. Their outward expressions come from within and they are very natural and pure. I feel that they are free.”

Shen Yun performs classical Chinese dance and ethnic and folk dances from the many ethnic minority groups across China. As an artist and pianist, Ms. Liu sought out Shen Yun in pursuit of the arts.

“This traditional Chinese dance is something I have been industriously exploring because I play the piano. Though the piano is a Western instrument, I have never stopped my exploration of Chinese culture,” she said.

“I’d really like to understand the things that belong to us. After seeing Shen Yun’s performance here today, I really feel that our things [traditional culture] is splendid and magnificent, and filled with energy. But this energy does not rely on violence,” she said.

“It is very gentle, very much connected with our hearts. Because of this the performance is able to have such a peaceful but enormous energy.”