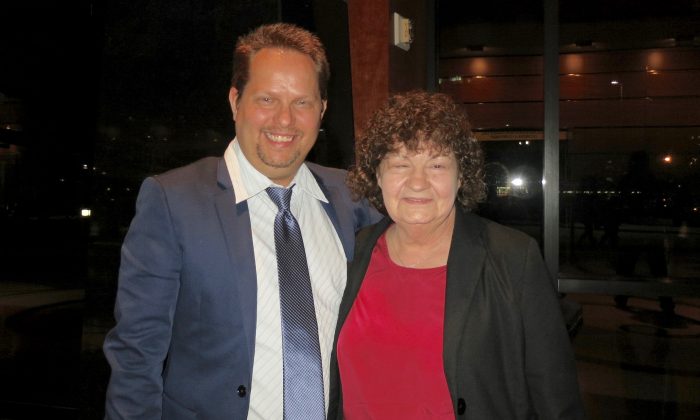 Chris Kimes and his companion enjoy Shen Yun Performing Arts, at a March 30 performance, at the Clay Center for the Arts & Sciences of West Virginia. (Sally Sun/Epoch Times)

CHARLESTON, W. Va.—Through music and dance, Chris Kimes felt Shen Yun Performing Arts had captured the essence of the traditional Chinese culture, and showed that its foundation was faith.

The performance had got across to the audience the “rich culture and heritage” of China, Mr. Kimes said at a March 30 performance at the Clay Center for the Arts & Sciences of West Virginia.

“I thought that it was exciting, the talent was just amazing of all the performers and the musicians. It was phenomenal, phenomenal experience,” said Mr. Kimes, a political director for a local non-profit organization.

The artists who formed Shen Yun had come together from around the world—many from China— ten short years ago with a mission.

In upstate New York in 2006, the artists created Shen Yun with a goal of revival. When communism took power in 1949, the 5,000 years of traditional Chinese culture was driven to near extinction. With systemic campaigns like the Cultural Revolution, communist leaders have tried to uproot traditional beliefs and values–like reverence for the heavens—advocating for struggle and atheism in its place.

Thus all throughout the performance, as the company’s website explains, traditional values like wisdom, propriety, benevolence, and justice are found in the stories. Traditional forms like classical Chinese dance are presented in pure form on stage.

Throughout it all, Mr. Kimes saw an underlying strength of faith, from history to the modern day.

“It was very, very poignant there about how even in persecution from the Communist Party, that they still kept their faith and were able to overcome that and still be themselves,” he said. “It was amazing, just amazing.”

The values of an ancient culture were relevant for man today as well, he thought.

“It’s just a common reference to today, that we need to stop and really be more mindful of each other as human beings,” he said.

In the world today, where people continue to spew hatred, what Shen Yun does is help remind us of “humanity and the essence of being humans,” he said.

“We all have that same inner core of love and truth and compassion, and to stay whole to that and keep it,” he said.

It was evident in some of the stories told through dance. Even in the face of persecution, there were spiritual practitioners holding on to their faith in one story that resonated with Mr. Kimes.

He felt it was a reminder for everybody, to stay true to their beliefs, and never give up.