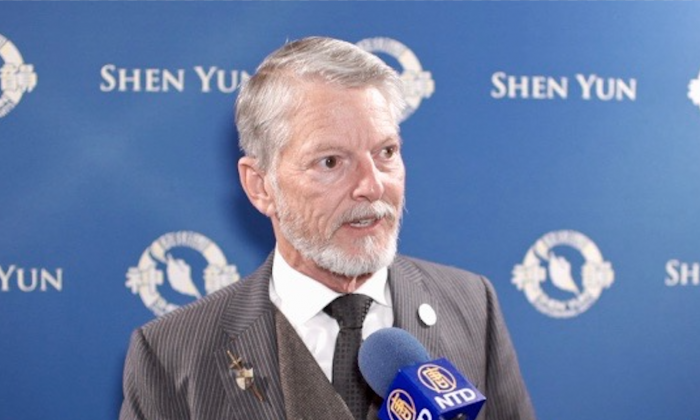 SAN FRANCISCO—Paul Taylor, a retired businessman who was a candidate for the U.S. Senate from California in the 2018 primary elections, attended Shen Yun Performing Arts for the second time on Jan. 4.

He had seen the classical Chinese dance and music production before in Long Beach, California. This time, he brought his wife to a San Francisco performance so she could enjoy it, too.

“It’s very beautiful. It’s fabulous. Fabulous. It’s amazing,” he said. “The music’s perfect. … I played the trumpet growing up, so I know what a good trumpet sounds like. They’ve got a good trumpet player there.”

Shen Yun is a New York-based performing arts company. Through its colorful displays of dance and its orchestra that uses both Chinese and Western instruments, Shen Yun aims to depict China’s traditional culture and values.

Traditional values are very important for Taylor, and he admired what he saw in the Shen Yun artists.

“I could tell that they’re dancing for a purpose,” he said. “I know that they all believe in a higher God and a Creator and a heaven, and that’s a spiritual thing, and that makes them behave accordingly.”

Faith in the divine was an essential part of traditional Chinese culture. Some Shen Yun dance pieces tell stories and legends from China, portraying values such as benevolence and respect for heaven.

“[People] that don’t have spirituality in their lives live empty lives that are about things that are temporal, like money and fame and things like that, and there’s more to life. It’s about people. It’s about love, peace, joy, happiness, and all that good stuff,” said Taylor.

He was touched by the dance piece “Goodness in the Face of Evil,” which is about a persecution that is taking place in present-day China.

Under the current Chinese communist regime, traditional morals and faiths are severely oppressed. For example, the meditation discipline Falun Gong (also called Falun Dafa) is based on the values of truthfulness, compassion, and tolerance; but the communist regime feared the enormous popularity of Falun Gong and began to persecute it in 1999.

In “Goodness in the Face of Evil,” a girl who practices Falun Gong is imprisoned and subjected to forced organ harvesting, a crime that the communist regime uses to make money by selling the organs of persecution victims. However, the girl’s goodness and faith triumphs over evil in the end.

“I’m aware of the … harvesting, and I am opposed to that, and I’m vocal about that, so the president of China has heard me speak against it, and I’m against it, and so when I come here my heart goes out to those people,” Taylor said. “That’s not love, peace, or joy, or anything that brings happiness to anybody, so it’s a very heartfelt thing for me to come and see this again.”

He admired the traditional values held by practitioners of Falun Gong.

“They love people, they’re compassionate, everything about them is what a perfect person should be like, and it should be upheld as something good, not something that is monetized, taken, like the girl’s eyes [in the dance piece],” he said. “I’m glad that Shen Yun is actually standing up and letting the people know that this is going on.”

“I hope that it gets people to understand that there’s things going on around the world they’re not aware of; and through music, and through the content of this show, that they can learn a few things about that and have compassion, and start standing up to stop this in China,” said Taylor. “It’s all acted out … in an easy, digestible way, so people can understand it.”