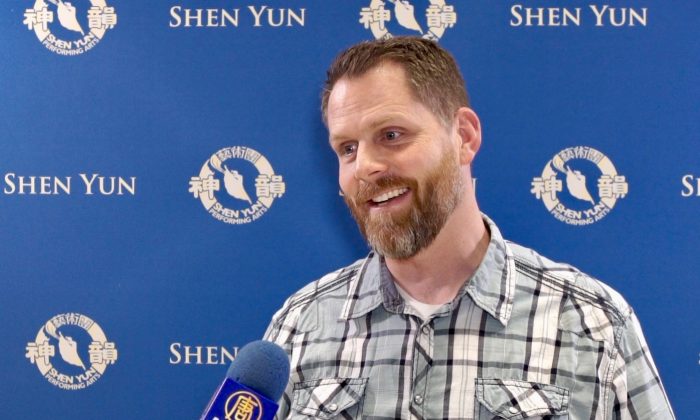 SALT LAKE CITY—Utah State Senator Jake Anderegg has two daughters adopted from China, and on March 16 he brought them to see Shen Yun Performing Arts as a way to connect with the Chinese culture.

“I wanted them to experience their culture tonight,” Anderegg said at the George S. and Dolores Doré Eccles Theater. “This is our first time coming [to see Shen Yun].”

“It’s beautiful, very, very beautiful, and it’s a part of Chinese culture I think is disappearing, so I like that they are restoring it and showing people the richness of the culture,” Anderegg said.

Anderegg grew up with a set of beliefs, and had thought that the culture and belief system of China might be very different. But as Shen Yun took Anderegg and his daughters through 5,000 years of ancient civilization, he realized the values and principles he holds dear are really quite universal.

“When you really get down to the basics of it, you’re very much the same,” Anderegg said.

Anderegg said he saw a “belief in God and a belief in a divine purpose for us in life,” and that ultimately we all “come here to be good people and treat each other really well, and help people.”

China was once known as the Celestial Empire, or the Divine Land, and Shen Yun was formed by artists in 2006 in New York to bring this 5,000-year civilization to life through the arts. This was a society governed by principles stemming from Buddhism, Taoism, and Confucianism. Its culture was said to have been imparted by the heavens, and civilization centered around the idea of harmony between heaven, earth, and humankind.

Anderegg said all this was clear through the stories, through the dance, and then spelled out even more in the lyrics sung by the bel canto vocalists, in Mandarin with English translations projected onto the digital backdrop.

“Through your culture you can teach those traditions,” he said. “These art forms—dance, song—you can teach it to your children so they can carry it on to their children all through the generations, that was really cool.”

It’s imperative to pass down these values, through culture, Anderegg said, “because without it we are aimless, and lose our way.”

“[Shen Yun] is beautiful, and I think anyone who hasn’t had the chance to see it, they should come, and come anticipating to learn new things and also to experience a really rich culture that you don’t get to see often,” he said.