State of Pennsylvania Pays Tribute to Shen Yun for Its Goodness, Harmony, and Renewal 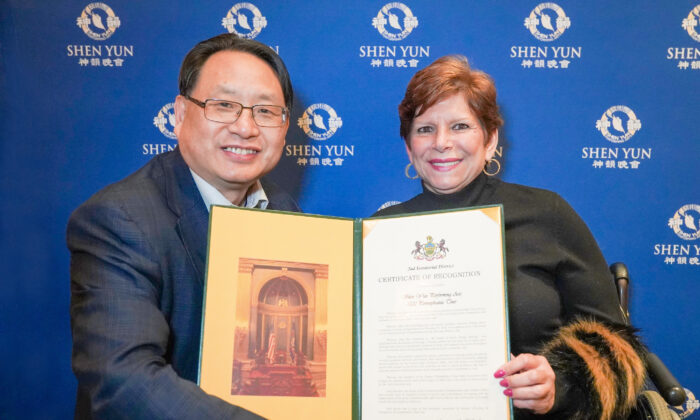 Pennsylvania State Senator Christine Tartaglione (R) bestows a certificate of recognition on the local organizers of Shen Yun Performing Arts, the Greater Philadelphia Falun Dafa Association, at the Merriam Theater, where she attended the performance, on Feb. 28, 2020. (NTD Television)

PHILADELPHIA—Since 1995, the people of Pennsylvania’s District 2 have tapped Christine Tartaglione to represent them in their State Senate. For these 25 years and counting, Tartaglione has garnered numerous awards for her public service, including the prestigious “John F. Kennedy Memorial Award” by the Kennedy Foundation.

But on Feb. 28, 2020, at Shen Yun Performing Arts in Philadelphia, Tartaglione was the one giving the award. She brought with her a certificate of recognition from the state of Pennsylvania for New York-based Shen Yun, for being the world’s premier classical Chinese dance company and for bringing its production to the City of Brotherly Love for almost a month of performances.

“I have to tell you, [Shen Yun] is stunning,” Tartaglione told NTD Television after the performance at the Merriam Theater. “I’ve never seen anything like it. I’m really honored to be here this evening to learn the rich culture of these dancers and the performing arts. It’s wonderful. I was very excited to be here.”

The proclamation Tartaglione presented to the local organizers of Shen Yun reads, in part, “the company’s popularity around the world reflects a growing need among people around the world for goodness, harmony, and renewal.” It pays tribute to Shen Yun for its 13 consecutive seasons in Philadelphia and encourages the artists to continue doing their important work for the benefit of all.

“We are really lucky here in the United States because they [the emcees] said some of these dances cannot be performed in China. We take a lot for granted but I’m glad that [Shen Yun is] here and you are sharing your culture with us,” Tartaglione said.

Shen Yun, ‘You could feel the spirit in the dance’

Shen Yun is based in New York and takes as its mission the revival of traditional Chinese culture. Through the highly-expressive art form of classical Chinese dance, the artists are able to convey the rich emotions and grand heritage of Chinese people’s 5,000 years of civilization.

This authentic culture was once almost lost at the hands of the Chinese Communist Party who has attempted to wipe out among the people its physical presence but more importantly, its deep spiritual roots as well. Traditional Chinese culture is profoundly spiritual and has been called divinely-inspired. Shen Yun continues these traditions on stage and off by incorporating heavenly beings and themes in its production and because its artists have taken up the spiritual discipline known as Falun Dafa in their daily lives.

Senator Tartaglione felt cultivated energy throughout the theater as she took in Shen Yun’s performance.

“I have to tell you I am inspired. I really am, You could feel the spirit in the dance and it comes across and you can feel it. I don’t know how to explain it. You want to get up and you want to be able to be a part of it.”

“It was so moving and I can see the divinity. As the show went, I saw the spirituality coming out. I was extremely impressed and I’m grateful to be here. I actually, when the beams of light came out, I could actually feel them going through me. I was moved that much,” Tartaglione said.

Because of Shen Yun‘s deeply spiritual themes, it cannot perform in China today since the CCP continues its destruction of traditional Chinese culture, and even violently persecutes the followers of Falun Dafa.

Tartaglione was glad to learn more about the plight of Falun Dafa in China through Shen Yun and encouraged others to experience the energy given off by the performers. “You have to feel the compassion, you have to feel it in the dance.” She expressed her disbelief that Falun Dafa is maltreated by the CCP because “it’s so beautiful,” she said.

“In the United States, we do take a lot for granted. We have the freedom of speech, freedom of dance. In this day and age, I did not realize that this art form cannot be performed in China and I don’t understand why because it’s so beautiful and it’s so moving. Between the dance and the music it just, it takes my breath away when I watch it,”  she said.

When it came to the artistic elements in Shen Yun, Tartaglione had high praise.

“I have never seen dancing like that. And I didn’t realize tumbling originated with this type of dance.”

She called the tenor of the evening phenomenal. “I’m glad [they] put the words up so that I could actually see what he was saying. It gave you hope. I’m telling you they gave me hope, the lyrics. Thank you.”

“The woman with the wooden instrument with only two strings [the erhu]—I could not believe the sound coming out of there for such an ancient instrument. It was really, really beautiful.”

Shen Yun is nearing the end of a month-long run of performances in Philadelphia and most have been sold out, a fact that made Tartaglione observe that the performance contains something that Philadelphians want.

After posing for a photo with the proclamation she bestowed on Shen Yun, Tartaglione had words of encouragement for the artists, that they keep going on their important mission.