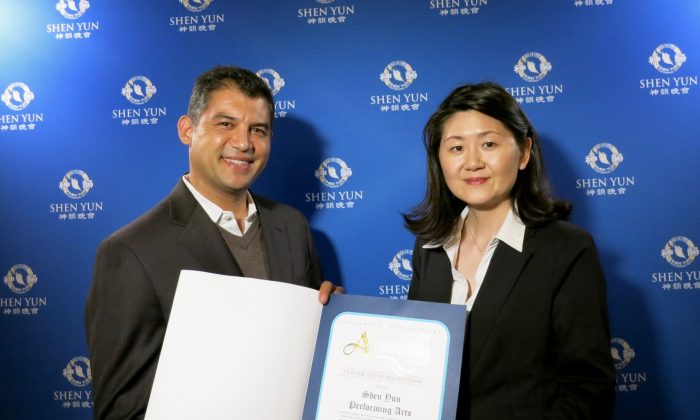 Assemblyman Das Williams presents a Certificate of Recognition to Shen Yun Performing Arts at the Granada Theatere in Santa Barbara on the evening of April 30, 2016. (Courtesy of NTD Television)

SANTA BARBARA, Calif.—The Honorable Das Williams presented a Certification of Recognition to Shen Yun Performing Arts, after attending its sold-out performance with his family at the Granada Theatre on April 30.

One of the hard-working members of the California State Legislature, Assemblymember Williams represents the 37th District, encompassing over half of Santa Barbara County and nearly a quarter of Ventura County.

In 2014, elected as Chair of the Asian & Pacific Islander Legislative Caucus, Assemblymember Williams is the first Indonesian American to serve in this role to strengthen programs serving immigrant communities, increase accessibility to healthcare, and improve the state of education in California.

“I loved the performance. My wife and I, we really enjoyed the show, but of course, one of the things that I hope it reminds people in America is that many of the performers here today are practitioners of Falun Dafa. It’s a religious group that is persecuted by the Chinese government along with Christians and Tibetans and many others,” said Assemblymember Williams, after watching the performance,

One of the violations of human rights Assemblyman Williams has followed is the persecution of Falun Dafa in China.

Falun Dafa is a peaceful meditation practice that embraces the guiding principles of truth, compassion, and tolerance. And it’s been brutally persecuted by the communist regime since 1999.

In Shen Yun’s performance, three vignettes that depict oppression in China, “Monks and the Red Guard,” “The Steadfast Heart,” and “Hope for the Future,” are set in modern times. In these, Buddhist monks and Falun Dafa practitioners are persecuted, but ultimately triumph through their steadfast faiths.

Deeply moved by the persecution of faiths in China, Assemblymember Williams called upon the American people:

“Though I am of a different faith, I think that all people of faith and all Americans should stand in solidarity with people who are persecuted in China because of their faiths. It’s something that I feel very strongly about that America should know about what is happening in China today.”

Aiming to restore traditional Chinese culture through storytelling dance and music, a group of overseas, leading artists formed Shen Yun in New York in 2006, and has since toured around the globe, presenting an all-new production every year.

Through 20 vignettes, audiences are taken on a journey throughout 5,000 years of China’s divinely inspired culture, from the legend of the Yellow Emperor descending from heaven to reign, to heroic tales in ancient times and modern times.

Assemblyman Williams was delighted by Shen Yun’s presentation of traditional Chinese culture, and was supportive of its revival efforts.

“Of course I’ve learned a lot from my Chinese American colleagues in the legislature, but it’s great to see it performed in a traditional way for us to see,” he said.

“I support, as Chair of the Asian Pacific Islander Legislative Caucus of the legislature, the celebration of all Asian cultures. This is a great example of it, especially for a community like Santa Barbara. We don’t normally get Asian cultural performances here, so this is great.”

The spirituality articulated in the lyrics sung by bel canto soloists, with the English translation projected onto a massive, digital backdrop resonated with Assemblyman Williams: “Great meaning behind the songs … I’ve learned a lot, and had a good time.”

Assemblyman Williams summarized his experience with Shen Yun: “My experience was a combination of learning and loving the visual element to the performance—the colors, the costumes, the lighting—It’s quite arresting.”