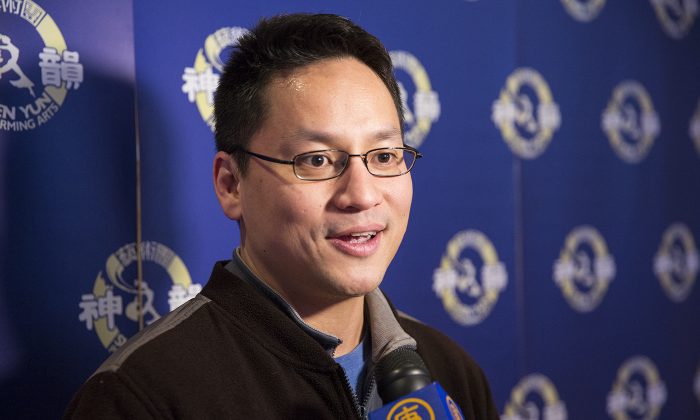 George del Prado attended Shen Yun Performing Arts at the Sony Centre in Toronto on Jan. 22, 2015, and expressed that he very much appreciated the spiritual element in the classical Chinese dance and music production. (Evan Ning/Epoch Times)
Arts & Culture

TORONTO—The history and the spirituality that are part of every Shen Yun performance struck a chord with George del Prado, a senior designer/video game developer with Mark Media.

“It was a lot of fun. It was just very striking how graceful and athletic the dancers were. I had a really good time,” he said after the performance.

“It was just really interesting learning about the Chinese history,” he added, singling out the piece “Capturing Arrows with Boats of Straw,” which tells of an epic battle between two armies in the year 208, at the end of the Han Dynasty.

He also noted “Mighty Monk,” a piece in which a young monk is bestowed with super strength and supernatural powers after eating a bowl of magical meat.

“I’m basically working on creating a comic book at work and it’s interesting how superpowers are thousands of years old, like the concept of that, the idea of that. I just found that very interesting.”

New York-based Shen Yun was formed by overseas Chinese artists in 2006 with the aim of reviving the essence of China’s 5,000-year-old culture. That cultural essence—respect for the divine—was the heart and soul of traditional Chinese culture, according to the Shen Yun website.

The spiritual element of the performance wasn’t lost on Mr. del Prado.

“I consider myself a very spiritual person. I certainly appreciated that and could relate to that feeling, like there’s something more than what we know, and it was very inspiring. It was very nice to see,” he said.

He was particularly impressed by “Your Long-Awaited Song,” performed by soprano Yu Ming.

“I can’t remember now the lyrics of the song, but it was very striking about how, I think the line said something about how you and I both come from Heaven,” Mr. del Prado said.

“Having that connection between people—I think is very important. I think it was very nicely done … to be able to depict that.”

“There’s a certain amount of cynicism in the world with a lot of the things that are going on, and how people can be cruel to each other … so having this feeling of connection with each other, like I said in that song, about how you and I come from Heaven—it is a very nice sentiment.”