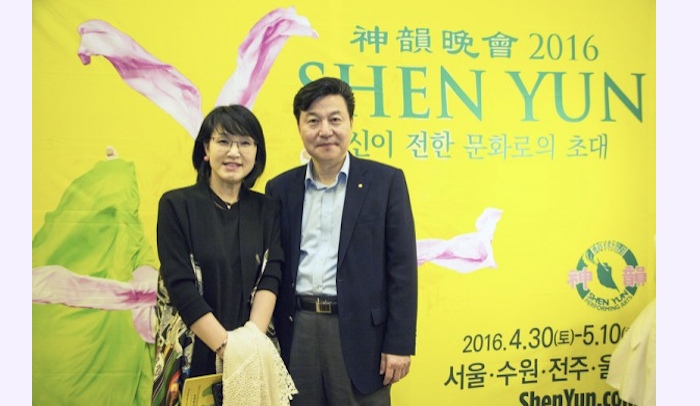 Jung Jong Hee, professor of University of Ulsan, attends Shen Yun’s premiere in Ulsan at the Ulsan Culture Art Center along with his wife on the evening of May 3, 2016. (Quan Jinglin/Epoch Times)

ULSAN, South Korea—Mr. Jung Jong Hee, a professor of University of Ulsan, wished that he could have discovered Shen Yun Performing Arts ten years ago when it started the world tour. “I am glad that Shen Yun was invited to Ulsan this year,” said Mr. Jung after he attended Shen Yun’s premiere on the evening of May 3, 2016.

“Shen Yun presents, just as its name suggests, the beautiful dance from the divine beings. It was so magnificent that no words can describe it,” added Mr. Jung.

According to Shen Yun’s official Website, “Every costume in a Shen Yun performance is presented with brilliant colors, displaying a splendid spectacle—from the Tang Dynasty’s ‘Raiment of Rainbows and Feathers’ to imperial dragon robes, phoenix coronets, and cloud capes; from the civil official’s headdress and robes to the warrior’s helmet and armor; and from the traditional rightward cross-collared Han clothing to the ethnic attire of the Manchurian, Tibetan, Dai, Mongol, and Uyghur ethnic groups.”

It brought Mr. Jung a refreshing experience. He said, “With appealing and vibrant colors, each piece was so glamorous and brought joy to my heart.”

The costumes in the classical Chinese dance “Tang Dynasty Grace” and the Tibetan ethnic dance “Celebrating the Divine” made a big impression on Mr. Jung.

“The orange gowns looked so vibrant on the ladies in Tang Dynasty. The blue and white water colors on the Tibetan girls made them look like butterflies gliding in the air,” he said.

Fascinated by the spectacular performance, Mr. Jung’s wife, Ms. Lin Cheng Hua, who is a board director of a design company, added, “The stage design, costumes, and colors in each program were well balanced and presented.”

Learning from the emcee that Shen Yun’s program is different every year, the couple were sure that they would come back next year.