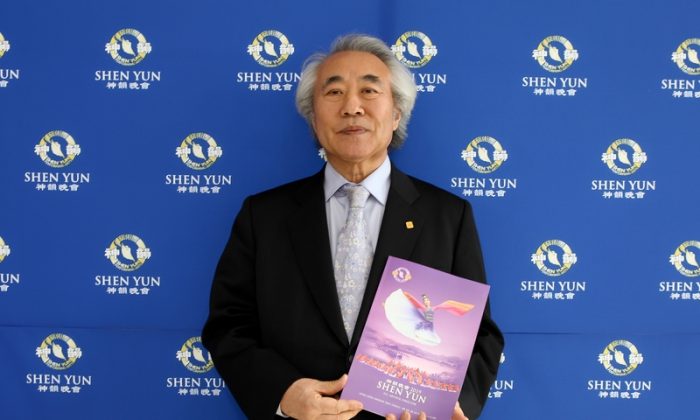 “This is a world-class performance. It was truly wonderful and touching,” said Ha Chulkyung, Chairman of the Korean Fine Arts Association, after he attended Shen Yun’s matinée performance at Goyang Aram Nuri.

“The classical Chinese dance [performed by Shen Yun] is different from Korean dance. It is full of vigor and vitality,” he continued. “The exotic style of performance is really very creative and dynamic.”

Marveling at Shen Yun performers’ high-level dancing skills, Ha Chulkyung praised, “Take the piece Mongolian Spirit for instance. It requires highly difficult skills throughout the performance. But all the movements are very dynamic and natural. That’s why it is so touching.”

“The synchronization among dancers on the stage, the images on backdrops and the sub-lines was perfect,” he said. “The connection of dancers and images of characters on backdrops was very natural. It is something truly unique.” “The overall coordination is seamless.”

Watching Shen Yun the second time, Ha Chulkyung was further inspired by the connotation implied in the performance. He noted, “Rather than using vocal language, Shen Yun uses dance to portray the 5,000 years of Chinese culture. It made the audience feel very warm and intimate, and [we] got motivation from it.”

“The coherence of the overall performance was perfect. It was a very dynamic performances,” he added. “Every piece of the performance was spectacular from the very beginning to the end. This kind of magnificent performance is hard to come by, even in other countries.”

With reporting by Kim Gook-Hwan and Billy Shyu.