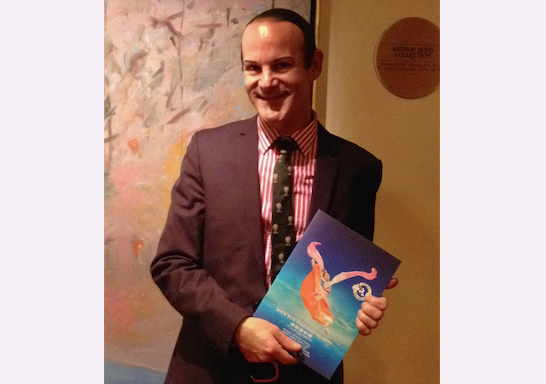 Harley Young, specialist in Arts and Design from Sotherby’s Auction House in Melbourne, was given a surprise invitation to see the performance. He has a working knowledge of Chinese history and culture, and he shared his thoughts on Shen Yun.

“My friend invited me to come, as a surprise, and I’m very interested in Chinese culture and history anyway, so it was really good for me to see this, and we actually, at my work, we deal with Chinese antiques and things as well, so I know some things about the dynasties and whatever, but the more information I learn and whatever is great,” he said.

“I loved it, I love, there’s so much, it was really good, really good.”

Mr. Young said he appreciated seeing such a panorama of dance and colour on stage.

“Seeing some live, the big, the colour, and the big performances, and lots of people, and the choreography, and the brilliant dancing, so nice.”

According to the company’s website, “Shen Yun’s mini-drama pieces draw upon stories and legends that span China’s history from the Yellow Emperor and through the Tang and Song dynasties and all the way to the modern day.”

Mr. Young said traditional values had been lost, and Shen Yun is allowing people to learn about traditional Chinese culture.

“It’s very interesting, I think it’s interesting in the modern times, since the world wars and, what have you, that communism, has taken away a lot, a lot of the younger generation don’t even know about their ancient beliefs, and about, even the dynasties and the history, just the traditional values, and the art, and the culture, and the life style, it’s changed a lot.”

China was once known as the land of the divine, with principles like justice, benevolence, and respect for the heavens making up the core of the culture. Shen Yun is based in New York, and the company’s mission “is to use performing arts to revive the essence of Chinese culture.”

“So I think it’s really good, for these kind of shows to come, and show people, Chinese people that don’t live in China or came from China know some of the history,” he said.

Mr. Young said he was sad for his friend who had grown up in China and had lived in Australia only a few years. “He didn’t even know a lot of these things—because you’re not allowed to know about that there,” said Mr. Young.

“I have a lot of Chinese younger friends living in Melbourne, some are from Shanghai, some are from Beijing, and places like that, and probably, their parents send them to Australia to study, or to make a better life … I will definitely tell my friends about this, and they should come.”

“I think that the common message of all good religions is basically [about] good and bad, and doing the right thing and having a healthy happy life, or treating other people well and treating the world well, and I think that that’s basically the same kind of message that I get from here. It’s complicated and it’s hard to summarize in a couple of sentences, but definitely a very positive message from this.”