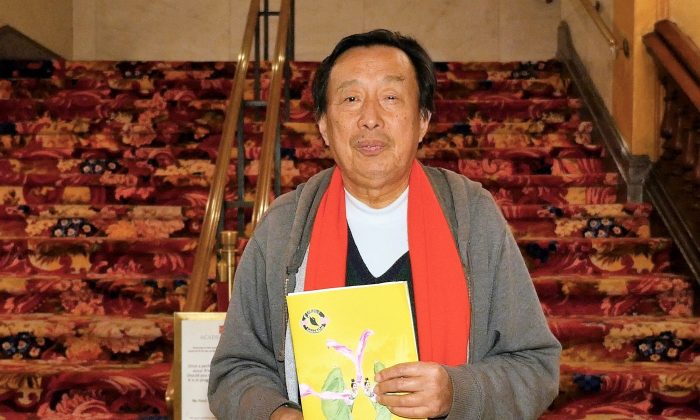 PHILADELPHIA—Luo Yu, the son of Luo Ruiqing, a member of the small group of founding cadres of the People’s Republic of China and one of the most powerful Chinese communist officials when he was alive, attended Shen Yun Performing Arts on Jan. 9.

Currently based in Harrisburg, Pennsylvania, Luo Yu held the position of a division commander in the General Staff Department of the People’s Liberation Army when he defected from the Chinese Communist Party soon after the Tiananmen Square massacre in 1989. He subsequently lived in Hong Kong, Portugal, and now the United States. Had he stayed in the military, not made his views known, and exhibited appropriate politics, he may have risen the ranks to become among the most powerful members of the military.

In an interview with New Tang Dynasty Television, Mr. Luo praised Shen Yun, recommended it to all Chinese, and discussed its relevance to contemporary China.

A lightly edited transcript of his remarks follows.

It was excellent! Whether to do with the content, the dancing, the technique—from every angle, it’s the pinnacle, the pinnacle of art. I’ve seen many first and second-tier cultural performances from China, but compared to them Shen Yun is a completely different feeling. It reveals a deeply true and sincere feeling in oneself. I hope that Shen Yun can go perform in China as soon as possible.

Seeing such a good Chinese performance outside of China is almost inconceivable—so I really hope they go back and perform.

I don’t know how much foreigners can pick up in this—but I think this is an absolutely good, absolutely good performance. All Chinese people should come and see it. Shen Yun has traveled around the world, but there’s a reason they can’t go to China.

Every moment of it was excellent. A lot of the Americans like the Monkey performances [Shen Yun dramatises episodes from the classic Chinese novel “Journey to the West,” which features a character called the Monkey King]—and I liked it too. But the ethnic dances—the Tibetan dance, the Mongolian dance—I really loved those.

China is a country with many ethnicities. So where is the cohesion, keeping them together? I’m not talking about one group bossing another around. A sense of cohesion and solidarity only comes when people think you’re good, not about you coercing them.

On the Red Guards

When the performance shows the Red Guards doing wrong, it’s actually not nearly as evil as the real Red Guards. Performing it in such a manner is of course fine, but the matter of how to examine and understand the behavior of the Red Guards during the Cultural Revolution is a deep issue. Everyone who was a Red Guard should reflect on the evil they did. It can’t all just be heaped on Mao Zedong. Red Guards, even though you were students, it’s still what you did: You killed people, you beat people to death—why did you do that?

On Atheism and Belief

Originally I was an atheist, growing up in an atheistic education. But after the Tiananmen Square massacre I gradually began believing in the divine—that is to say, that there’s something beyond man. Call it God, or call it what you like; it’s watching you, looking after you. Personally, I feel that God is watching over me.

I think that anyone who is practical and realistic who sees Shen Yun—first, he’ll definitely like it. No matter the angle you view it from, whether purely as an exercise in aesthetic appreciation, putting aside all political aspects, you’ll like it. And then you’ll gradually begin carefully and deeply pondering the artistic direction behind the arrangement and composition of this program. What is it? What message does the creative director want to transmit to humankind? Not just Chinese—look at all the Americans who also love it. Though, actually, I think I understand it better than they do, because whichever way you put it, this is Chinese culture.

On the Persecution of Falun Gong

According to China’s constitution, Chinese people have freedom of belief, isn’t that right? So if the country is ruled according to the law, according to the constitution, and there’s freedom of belief, if Chinese people can believe whatever they wish to believe, then I think the people believing in truthfulness, compassion, and tolerance would be a very large number. Persecuting a certain belief, that’s in violation of international law and China’s constitution. So first of all, the Party must stop persecuting truthfulness, compassion, and tolerance.

I’ve heard about mainland Chinese watching Shen Yun on DVD. A lot of my fellow alumni have seen it. We’re a tight circle, whether high-level cadres or low-level cadres, we’re all close.