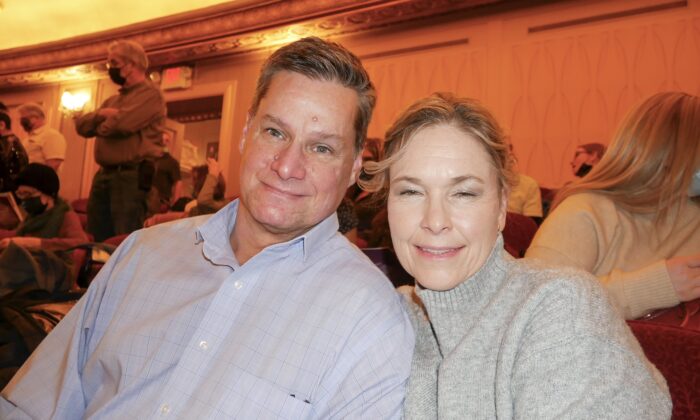 OMAHA, Neb. —You have to venture out occasionally and for Tony and Laynne Evans, Shen Yun was definitely worth going out for.

The couple was attending Shen Yun Performing Arts at the Orpheum Theater. The pandemic has left many people in fear of stepping outside.

“I think the risk is very low, and the benefits are very high. We do things that are important and big to us and this was something that was important to us,” said Tony, a rep for Abbott, a company that makes pacemakers.

It was the color, the choreography, and the storytelling, with the humorous vignettes that enchanted Laynne, a nurse. “It was fantastic,” she said.

“The commercials about this show don’t do it justice. You have to really experience it for yourself.”

Tony thought there was more to Shen Yun than the dancing.

“There’s the spirituality and the background of where all this came from and what they’re trying to convey to us feels more than just a dance and I think [Shen Yun] is doing a very good job of doing that.”

Tony felt that Shen Yun’s message came from both the past and the present—the history of China and the problems that are being faced in the country at this very moment.

“We’re dealing with the same kind of things [in the United States] in our problems with our people, with our government. I mean, [Shen Yun] has a message for everybody,” he said.

“I think that it’s just a wonderful combination of art and spirituality,” Tony said noting how Shen Yun portrayed the ethnic culture of China and the role politics played in Chinese society.

The first piece in Shen Yun’s repertoire, ‘Salvation During End Times’ was a “spectacle of vision,” said Tony.

“It’s the colors and the movement, and the choreography and the costumes. At first, you’re just overwhelmed with just the beauty of what you’re being hit with,” said Tony.

“It’s absolutely fantastic. The quality of the dance is top-notch.”

‘The Plum Blossom in Spring’ dance, depicting courage and resilience, appealed greatly to Tony’s affinity with nature. He was impressed by the colors and the choreography.

Also in the audience that day were Lorie Vestal and Andy Ostrowski who work in retail management. They were excited about seeing Shen Yun after being gifted tickets for Xmas by their son and daughter-in-law. They were not disappointed.

“I thought it was amazing. The dancing, the stories, the whole thing was just unbelievable,” said Lorie, adding that she particularly enjoyed ‘The Plum Blossom in Spring’ dance.

She also enjoyed ‘Insanity at the End of Days’ which portrays the persecution of Falun Gong, a peaceful spiritual group whose daily lives are guided by the principles of truthfulness, compassion and tolerance

“Just being able to get out and see something like [Shen Yun], something that beautiful, that artistic—just kind of makes you feel better inside,” he said.