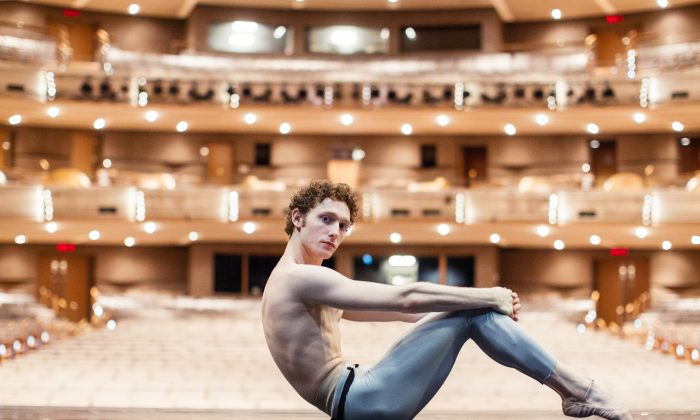 Skylar Campbell Makes Debut as Mercutio in Romeo and Juliet

TORONTO—Skylar Campbell is looking forward to making his debut as Mercutio in Alexei Ratmansky’s Romeo and Juliet in the National Ballet of Canada production this Sunday. He will be dancing the role again when the company goes to Los Angeles July 10-13.

It’s a role that came by surprise, but one that is a natural fit for the young dancer.

“He has such a witty sense of humour that I can relate with because I feel like I’m witty and good humoured in real life too,” said Campbell in a phone interview.

“It makes him really exciting to dance when you can really relate with the character on this level,” he added.

For Campbell, dancing the role of Mercutio is going to be particularly special as he will be performing it alongside two good friends, first soloist Naoya Ebe who is playing Romeo, and second soloist Dylan Tedaldi as their friend Benvolio.

“To take that friendship that’s in real life and bring it on stage, I think it’s going to be a bit stronger connection—we’ll have a lot more fun with it.”

Born in Laguna Beach, California, Campbell trained at the V&T Dance Academy in Orange County until joining the National Ballet as an RBC Apprentice in 2009. He became part of the corps de ballet in 2011, was promoted to second soloist in 2013, and quickly progressed to lead roles in several ballets, including Nijinsky and The Nutcracker.

While Campbell makes his debut as Mercutio this season, it is not his first role in Romeo and Juliet. In 2011, he performed as part of the group dances when Ratmansky unveiled his new version, commissioned by the National Ballet for its 60th anniversary celebrations.

Prior to this, Toronto audiences had been familiar with John Cranko’s version, performed by the company since 1964. Ratmansky’s bold and dynamic choreography met with critical acclaim in both Toronto and London, England, where it performed last year.

“I think Ratmansky’s steps for every character are very fluid and it really moves the production along with no dull moments ever. I think it’s going to appeal to many new ballet-goers because it’s jam-packed with so much exciting classical vocabulary,” said Campbell.

In the ballet, as in Shakespeare’s story, Mercutio is Romeo’s close friend, whose fight with Tybalt, Juliet’s fierce cousin, leads to the tragedy of Romeo and Juliet. Yet Mercutio is not part of the Capulet/Montague rivalry that Tybalt holds to. Rather he is more out to poke fun and enjoy himself.

“He does have a temper and his occasional outbursts are really fun to dance. … He brings a fun-loving, witty sense of humour to the ballet and I think people always have a good time watching different dancers or actors portray this role,” said Campbell.

With relatively little rehearsal time amidst the National Ballet’s busy season, Campbell caught up quickly to the dancing in Romeo and Juliet. The sword fighting, however, presented a challenge.

“It’s a much different technique—it was a new learning process for me rather than what we’re used to,” he said.

Yet with the help of more experienced dancers, such as first soloist Etienne Lavigne who plays Tybalt, as well as principal dancer Piotr Stanczyk and first soloist Keiichi Hirano who are playing Mercutio in the other performances, he is ready to have a good time.

In the story, Mercutio is eventually killed by Tybalt, a death that spurs Romeo’s rage, Tybalt’s death, and Romeo’s consequent banishment from Verona. Yet according to Campbell, there is a special beauty to this scene.

“I love being able to die to what I think is one of the best ballet scores ever written—by Prokofiev. How could you not want to die to this beautiful music? It’s amazing,” he said.

The National Ballet is introducing Ratmansky’s Romeo and Juliet to The Music Center in Los Angeles in July, and Campbell is looking forward to reprising his role in his native California. This will be the dancer’s second stop at the venue. The first time was in 2012 when the National Ballet presented Christopher Wheeldon’s Alice’s Adventures in Wonderland.

“It was amazing to dance for my home crowd. I had a lot of family and friends that came to see Alice, so I’m really excited that they’re going to be able to see me dance Mercutio in Romeo and Juliet.

Last time, he and his fellow artists were particularly impressed by the audience’s reaction.

“We were all really surprised at how generous the crowds are for ballet. They really appreciated the company. I think it will be interesting to see how they respond to this ballet.”

The National Ballet of Canada is staging Romeo and Juliet from June 20-22 in Toronto and from July 10-13 in Los Angeles. For more information, visit: www.national.ballet.ca