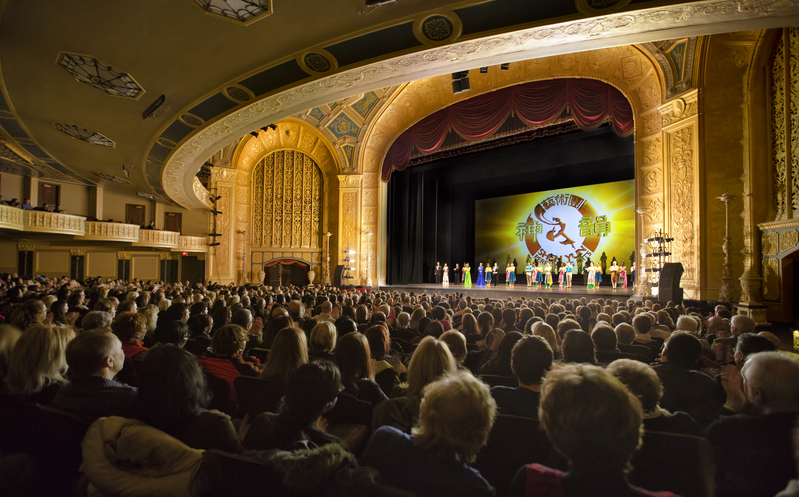 DETROIT—”I think the show was fantastic. The lines of the dances were unbelievable, and the acrobatic tumbling part was amazing. I loved it,” said dance instructor, Karolyn Leibovitz after attending Shen Yun Performing Arts’s evening performance on Feb. 7, at the Detroit Opera House.

Accompanied by her husband, Arie, the 44-year veteran dance instructor who holds a ballet degree from Butler University in Indianapolis, was at a loss for words when asked to describe the choreography.

“The skill level is beyond anything imaginable.”

“Chinese dance is at the heart of what Shen Yun does. Known for its incredible flips and spins, and its gentle elegance, it is one of the most rigorous and expressive art forms in the world,” according to the company’s website.

The website further mentions, “For 5,000 years divine culture flourished in the land of China. Humanity’s treasure was nearly lost, but through breathtaking music and dance, Shen Yun is bringing back this glorious culture.”

Mrs. Leibovitz said that “they make the dance look easy, but it’s very difficult to perform in the manner which I just witnessed myself, watching all the wonderful performers. I felt emotion all the way through the program and I loved it.”

“They make it look simple and easy, and it’s so difficult and so hard to do, these movements, in and out of formation, staying together as a group—just took my breath away,” she added.

Finally, Mrs. Leibovitz noted how well the orchestra and the dancers were able to synchronize, creating a harmony between what each performer was doing and the story being told.

Piano Teacher, Sarah DePalma, was also in attendance for Shen Yun’s evening performance on Feb. 7, and she noted something similar. “The music reflected the themes so well. If it was (an) elegant, beautiful theme, the music was beautiful. [In] the aggressive type themes, the music was more aggressive. It coordinated very well,” she said.

“The orchestra was phenomenal with the traditional instruments, Chinese, and the Western. It was beautiful. I enjoyed that orchestra very much. I think it’s unique and very fascinating,” she said.

Shen Yun’s orchestra is a unique blend of traditional Western and Eastern instruments.

Ms. DePalma was pleasantly surprised that there was a spiritual aspect to the traditional Chinese culture that came through during the performance “I’m very spiritual myself, so the whole concept of heaven—yes, it’s (a) very personal connection—yes. I believe that’s our whole goal to go to heaven, and our behavior, hopefully will reflect that.”

Reporting by NTD and Andrew Darin