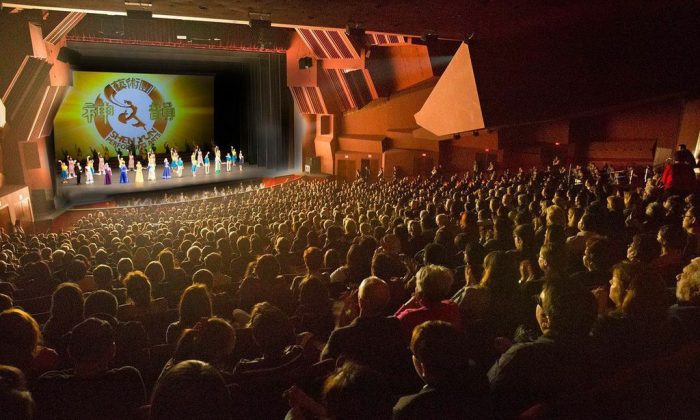 COSTA MESA, Calif.—Residents and visitors alike throughout the Greater Los Angeles Area have been captivated by Shen Yun Performing Arts World Company, which began the Southern California portion of its 2015 worldwide tour Jan. 22.

Six consecutive performances at Segerstrom Center for the Arts were sold out. Audience members were heard cheering and seen standing in ovation, pressing their hands together in front of their chest as a sign of respect, and clapping with their hands above their head.

Theater staff commented on the large number of theatergoers walking out of each performance relaxed, in good spirits, and smiling.

Two of those theatergoers at the Feb. 1 evening performance were Mr. Robert Schaar and his wife, Joan.

Mr. Schaar, a member and past president of the California Art Club, is a nationally recognized artist whose work is on permanent exhibition in the Smithsonian Air and Space Museum, Pentagon, NASA Space Museum at Cape Canaveral, and several other notable locations. In addition, he has been commissioned as a portrait painter for many government and private figures, according to his website.

“I’m an artist by trade,” said Mr. Schaar, “and I’ve been doing that for many years, and that’s why I appreciate what I’ve seen tonight. It’s beautiful.”

Shen Yun is a New York-based classical Chinese music and dance company with a mission to revive the beauty and values of traditional Chinese culture.

According to the company website, the performance “weaves a wondrous tapestry of heavenly realms, ancient legends, and modern heroic tales, taking you on a journey through 5,000 years of Chinese culture.”

One major feature of Shen Yun mentioned by nearly every theatergoer this interviewer has encountered is the digital projection, state-of-the-art graphics technology that creates richly colored, vivid backdrops that “extend the stage and transport audiences to a world where heaven and earth are one,” according to the website.

“The backdrops are magical windows to completely different realms. From vast open grasslands in one dance to the stately elegance of Tang Dynasty pavilions in another; from dusty yellow battlegrounds to tropical beaches to Himalayan peaks to picturesque scenery of the Yellow River Delta—the digital projection infinitely expands and transforms the stage,” states the Shen Yun website.

Mr. Schaar said he was enthralled by the backdrops.

He added that with the wonderful dancers and colors, “It had all the ingredients of a beautiful show.”

Mrs. Schaar was also delighted by the beauty of Shen Yun.

“Beautiful. Just beautiful,” she said. “Magical, with the background and scenery.”

She enjoyed how the dancers would disappear from the stage and suddenly appear as digital animations in the backdrop, then reappear on stage moments later.

Most of what Shen Yun displays is classical Chinese dance. The performance also includes vocal soloists as well as an erhu solo.

“The erhu is one of the most important Chinese instruments, with a history of over 4,000 years. Though it has only two strings, it can convey a wide range of emotions,” explains Shen Yun’s website.

Mrs. Schaar was struck by the erhu solo. “The instrument she played … it was beautiful,” she said. “Lovely.”

Mr. Schaar explained how he found out about Shen Yun. “I heard about it from other people, and they all recommended it, and I’m glad I made it. It’s a beautiful, wonderful show.”