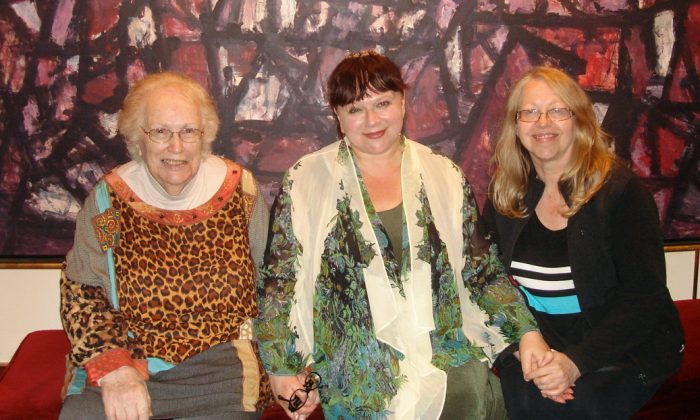 MELBOURNE, Australia—Miriam Claire, singer and writer was enthralled by the classical singing at Shen Yun’s performance on March 29 in Melbourne. It was a new experience for her.

She explained,“As a singer, I’ve taught people of all ages, and I taught a Chinese singer in London, but the style she was singing was very different, so I have never heard a true Chinese operatic singer until this performance, and they sang beautifully.”

“Their voices were just gorgeous, very well trained, and seeing the sub-titles up there so I could understand what they were singing, [in their] beautiful songs. It was a lovely experience.”

The company’s website defines the style and training. Shen Yun vocalists’ singing technique is the genuine bel canto tenor and soprano technique, and is very similar to the technique used by the “10 great tenors” of the past.

Ms. Claire said, “I think it succeeds in what it out sets out to do, and it gives me as singer an interesting insight into the Chinese singing tradition … because I have never heard voices sing like that within a Chinese cultural context, so it was very special to me.”

The Shen Yun website says, “A Western philharmonic orchestra plays the foundation, while traditional Chinese instruments lead the melodies. The sound produced is uniquely pleasing to the ear.”

Ms. Claire was very excited about this new sound, hearing it for the first time saying,“The orchestra was just wonderful. … It was very exciting. I love the combination of Eastern and Western instruments and the fact that the orchestra was introduced in such a unique way to the audiences, that [it was] waved in; which is a very unique tradition, I guess. I’ve never seen an orchestra wave at an audience before like that but it was beautiful, it was very charming and it just draws you in, it was beautiful.”

Ms. Claire was introduced to Chinese history at school. She said, “I studied Chinese history when I was at University, and I’ve always been fascinated by the culture, love the culture, the ancient culture. And so I wanted to see the show for many years, and today was the day.”

Shen Yun presents a fascinating insight into the history through its dance stories. A unique feature of Chinese civilization is that its history has been documented and passed down uninterrupted for 5,000 years, sometimes in vivid detail.

Ms. Claire is concerned that Shen Yun cannot be seen in China today. She said, “[It] shows the tragedy of the fact that the people in China can’t see this show.

“You know that people in China can’t see this, but this is the beauty of Chinese culture, ancient culture, and it would be very nice if the Chinese authorities would listen and allow this kind of thing to be presented in China. I think the show is beautiful and I think it is a shame that people in China don’t get to see it. I feel so privileged that we get to see it outside of China.”

In conclusion Ms.Claire said “I just think every [one] should see it. It was a wonderful insight into the Chinese traditions and culture and it [is] beautiful… really, really moving and calming, just sort of makes you feel happy.

“It’s beautiful—exquisite is the word.”