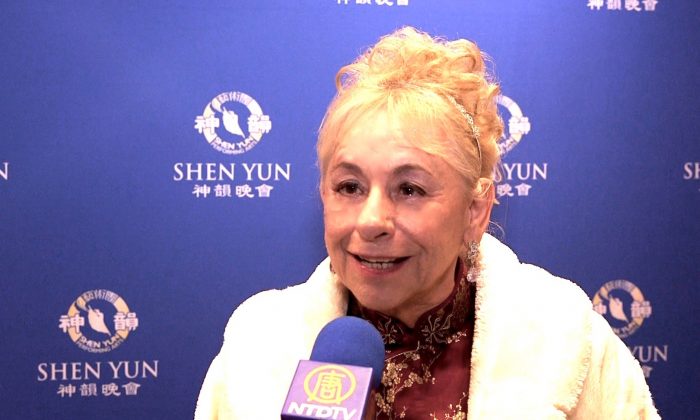 LONG BEACH, Calif.—Linda Saito says she has been singing her entire life. Dressed in a maroon, traditional Chinese dress with small, golden plum blossoms, she described her feelings after watching Shen Yun Performing Arts, which was sold out March 19 at the Terrace Theater.

“I was enraptured. It was dream-like,” she said. “You have to see it to experience it.”

“It was so uplifting, so artistic, so creative. It was very thrilling—the mastery of dancing and singing was truly wonderful,” she said.

Ms. Saito added that she could feel the solo vocalists even though she doesn’t speak their language.

Shen Yun is a New York-based, classical Chinese dance and music company that tours throughout the world each year to more than 100 cities in 20 countries and across five continents on a quest to revive traditional culture.

Each Shen Yun performance offers a panoply of China’s rich cultural heritage. A live orchestra accompanies each dance vignette, which brings to life ancient legends as well as contemporary stories of courage.

Ms. Saito said she had feelings of hope, peace, happiness, and love while watching the performance.

She particularly enjoyed a piece called “Monks and the Red Guards,” which depicts young Maoist Red Guards attempting to desecrate a Buddhist temple during the Cultural Revolution. They are thwarted, however, by the monks who have supernatural martial arts skills.

“It means a lot to me to see the Buddhist [pieces],” she said.

In addition to the dancing, vocal and instrumental soloists present impassioned musings on life from a traditional Chinese perspective.

“There is something behind it besides being purely entertained. There is a message there,” she said.

She began to shed tears while describing her experience watching Shen Yun.

“They’re tears of joy. Talking about what you’re feeling can be emotional, and the performance was very emotional in itself,” she said. “Talking about the ancient arts and how they’ve been crushed by the government. They do have a deep, deep message to bring to us here in the United States.”

Ms. Saito was referring to the fact that Shen Yun cannot be seen in modern China, where traditional culture has been nearly decimated by the communist regime and artists cannot freely express themselves.

She’s happy Shen Yun gives Chinese artists a platform to express their craft. “It’s a great thing,” she said. “I’m so glad that there was a group of people that got together and decided that they would revive ancient Chinese traditions so that we can enjoy them.

“We’re so grateful that we have their talent, and they share it with us. You can hear the audience; they are so appreciative.”

Ms. Saito plans on telling her friends about Shen Yun.

“I’ll be raving about this. Anybody who can hear, I’ll be telling them about this. They’ve got to see it.”