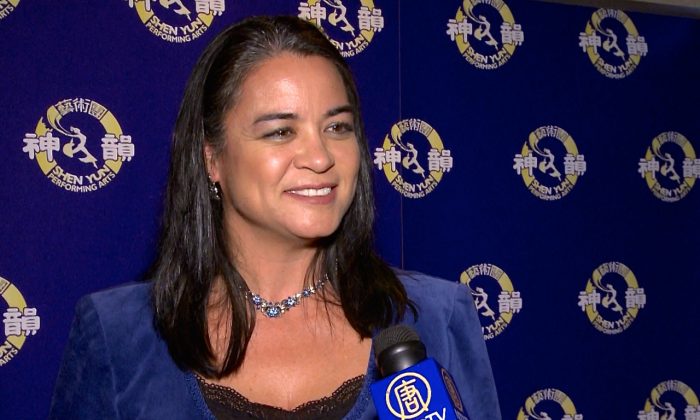 Andrea Shore talks about her impression of Shen Yun Performing Arts after seeing the show at Hamilton Place Theatre on Dec. 28, 2014. (Courtesy of NTD Television)
Company

“[The show] was beautiful. It was exquisite,” said Ms. Shore, who sings rock and roll and country with the Shoreline Band, as well as in an acoustic duo known as Strum Card. Both groups play regularly around Southern Ontario.

She was particularly struck by the synchronicity of Shen Yun’s dancers.

“The unison was amazing. That’s what I really noticed was the unison and the quality of the dancing. And the costumes obviously were extraordinary.”

Ms. Shore said she felt that the dancers “just love to perform and that generates to the audience, so we love to enjoy their performance.”

“The use of technology too was nice—to incorporate that into ancient Chinese dance. I appreciated the computerization, and incorporating modern technology into the older-style dancing,” she said.

Shen Yun’s mission is to revive the 5,000 years of authentic traditional Chinese culture that has been all but lost under decades of communist rule. The heart and soul of this ancient culture can be found in principles such as compassion, justice, and respect for Heaven, as explained on the Shen Yun website.

Ms. Shore, who also works as a nurse, appreciated this aspect of the performance.

“That was very nice to see, and the compassion and qualities of what it should be like to be a good human being instead of a lot of the things that we see in the world now. This actually makes you smile and realize that there is some potential in the world and that we all have to really just get along,” she said.

“I think we have to have respect for each other and each other’s cultures, and I think in doing that and in seeing that then we’ll go a long way.”

Although Shen Yun is reviving the authentic culture that was almost destroyed over decades of communist rule, the show is not allowed to play in China—something Ms. Shore found lamentable.