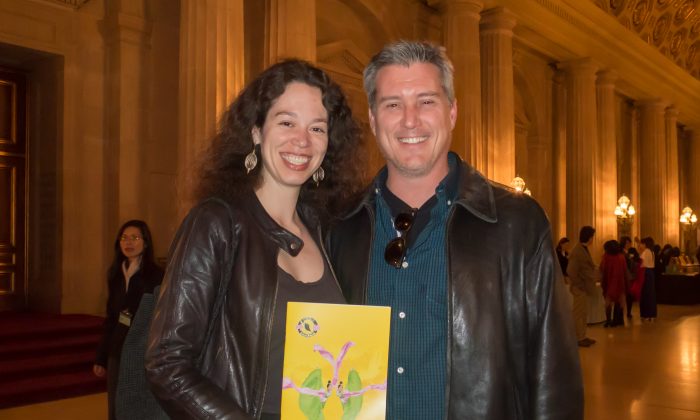 “I’ve never heard the erhu played like that before,” Ms. DeMoulin said. “That was transcendentally lovely.”

The erhu is a traditional Chinese instrument with two strings, held vertically and played with a bow. According to New York-based Shen Yun’s website, it has a history of over 4,000 years and is capable of expressing a wide variety of emotions.

Ms. DeMoulin found the Shen Yun erhu solo inspiring. She attended the performance on the evening of Jan. 7 at the San Francisco War Memorial Opera House with her friend David Cox, who bought the tickets.

Ms. DeMoulin and Mr. Cox both loved the performance and described their favorite parts enthusiastically. “Far and away … for me the erhu solo was the highlight,” said Ms. DeMoulin. “I’ve never heard that instrument played quite so beautifully.”

She lives near San Francisco’s Chinatown and works as a salesperson at a tourism company. She has heard erhu soloists in Chinatown and has always liked the instrument, but the piece played in Shen Yun was different.

It was elegant. It was light. It was nuanced. I really liked it a lot.
— Tara DeMoulin

“Exactly. It was elegant. It was light. It was nuanced. I really liked it a lot,” said Ms. DeMoulin.

Through song, music, and classical Chinese dance, Shen Yun Performing Arts revives traditional Chinese culture for today’s audiences. The New York-based company has toured the world with this mission since 2006.

“The singing was beautiful too,” said Ms. DeMoulin, who sings in a variety of genres—from jazz and opera to French music and Polish poetry.

Shen Yun’s vocal soloists use the bel canto technique to sing original pieces in Chinese, written especially for Shen Yun. The lyrics contain deep philosophical meaning, according to the program.

Mr. Cox, a management consultant, was fascinated by the classical Chinese dance and the ethnic and folk dances. These pieces are performed by world-class dancers and accompanied by a unique live orchestra with both Eastern and Western instruments.

“Excellent! Excellent!” Mr. Cox said. “It’s beautiful. It was stunning. The colors were amazing. The symmetry and the synchronization were just fantastic.”

One of the dances that left an particularly deep impression was the Tibetan ethnic dance “Celebrating the Divine,” which is set in the Himalayas. “It was light and playful and beautiful,” he said.

He also admired the folk dance in which female dancers deftly spin and toss handkerchiefs, as well as the dance piece “Fairies of the Sea” in which flowing blue fans mimic ocean waves.

Ms. DeMoulin found the spins performed by the dancers incredible and gorgeous.

“I’ve never seen synchronized dancing that was that precise and beautiful. Ever. That was that perfect,” Ms. DeMoulin said. “Overall, it was just a stunning, beautiful show.”

Shen Yun also includes story based dances that tell tales of ancient and modern China. Some of the modern tales depict the oppression of Falun Dafa, a meditation discipline with roots in traditional Chinese culture.

Living next to Chinatown, Ms. DeMoulin had heard before that Falun Dafa is persecuted in China. “To see it in dance like that was really beautiful,” she said. “I think a lot of people who don’t know what it is are able to be introduced to it through beauty.”

“I’d tell [my friends] to come see the show for everything,” Ms. DeMoulin said. “It will leave you with a visual impression and lovely memories, and it is one of the great, inspiring musical events that shouldn’t be missed.”