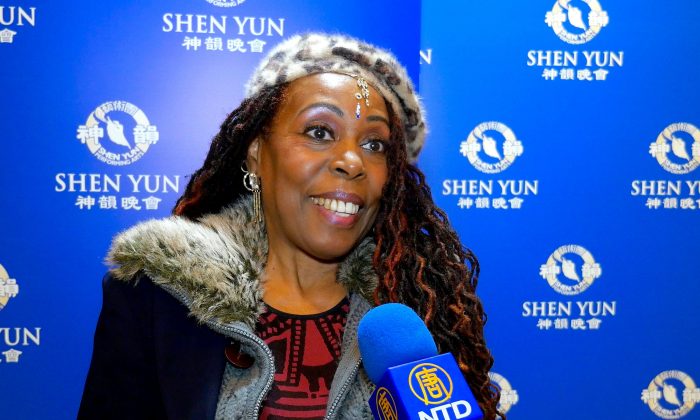 NEW YORK—Who better to appreciate a Shen Yun performance–a world-renowned performance that includes classical Chinese dance, a one-of-a-kind orchestra, as well as the revival of the bel canto technique—than someone in the profession itself?

“They were excellent, they were beautiful,” said Ms. Heslop. “As another singer, you just sit and enjoy and feel yourself doing the notes as well and checking how you might express the same thing. So it’s beautiful. It’s an incredible, refreshing experience.”

The performance featured three solo vocalists: tenor Guan Guimin, bass Qu Yue, and soprano Geng Haolan; and each was met with explosive applause and, in Ms. Geng’s case, an encore.

Beyond showcasing the performers’ talents, Shen Yun combines it all with vivid costumes and a unique, interactive backdrop that makes for quite an experience.

“The colors, are so healing,” said Ms. Heslop. “People forget that color changes your mood, it can be used as therapy.”

There was also a bridge between music and color as seen in the performance, that Ms. Heslop felt.

Sound is apparently unseen, although when sound is brought into a realm that you can see it, it has color.
— Princess Heslop

“I think music allows you to tap into the unseen. Sound is apparently unseen, although when sound is brought into a realm that you can see it, it has color. When you know that about sound and its power, because everything is vibration, everything is energy. We’re all just packed energy walking around,” she said.

And the energy she felt from Shen Yun was something she called enchanting.

Shen Yun has been wowing audiences all over the world with a journey through 5,000 years of rich Chinese culture for the last decade. Through a symphony that combines East and West music, beautiful vocal music, and classical Chinese dance, Shen Yun aims to recreate for the audience a time and place where the world was full of magic and splendor.

That place is known today as China, though over the last half-century, communist rule has tried to erase most of that traditional culture. Shen Yun was formed by artists around the world to revive it, and the result is an audience that can’t get enough of it.

“All of it is so beautifully put together.”