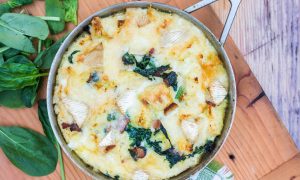 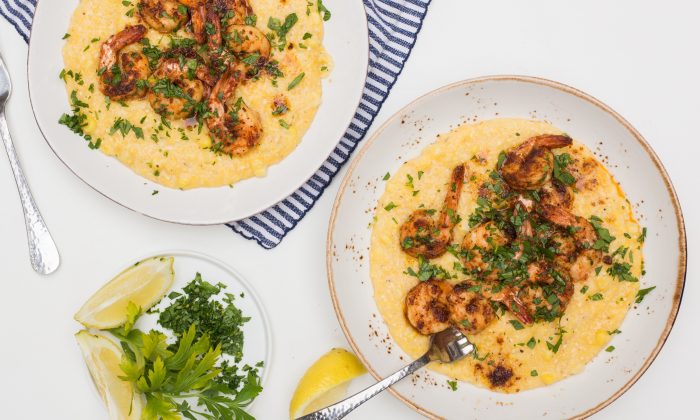 Shrimp and Grits, a Taste of Growing Up in the South

This quick and easy, Cajun-spiced version is weeknight comfort food at its best
By Caroline Chambers

Even at the youthful ages of 18 and 21, when my now-husband George and I first started dating, we both knew it was serious.

Our courtship kicked off just as my freshman year at UNC-Chapel Hill was coming to a close, so perhaps it was the impending summer break that incited us to declare our feelings for one another so quickly, or perhaps it was the fact that even at age 21, George was the most straightforward, zero-beating-around-the-bush person I’d ever met.

Either way, within weeks of meeting, we found ourselves walking into a Chapel Hill institution, Crook’s Corner, for dinner with my parents, who had driven into town to meet this new boyfriend of mine.

The dinner went off without a hitch: George dazzled my parents with his profound understanding of every single current event possible, his passion for serving our country, and his love for their daughter.

My parents are my favorite people in the world, so watching them fall in love with this person whom I had so quickly fallen in love with is an intense memory for me. I remember the exact table where we sat, I remember what I wore, and of course, I remember exactly what we all ate.

The latter is easy to remember, because when you eat at Crook’s Corner, make no mistake, you order the shrimp and grits.

Shrimp and grits is one of the most iconic dishes in Southern culture, and Crook’s Corner is one of the most storied places to enjoy it. Crook’s owner Bill Neal is recognized for elevating the recipe from a humble meal from the Low-Country marshes to a decadent dish at fine dining establishments across the South and beyond.

The Crook’s version boasts cream-based cheese grits topped with saucy mushrooms and shrimp and crisp bacon. While the recipe is a simple one, it does involve multiple steps and plenty of chopping, so it’s worth making when you have the time but out of reach for a weeknight meal.

For those weeknight shrimp and grits hankerings (as we call them in the South), my Cajun butter shrimp and cheesy cheddar grits are the answer.

George and I make versions of shrimp and grits often, sometimes with goat cheese grits, sometimes simmering a chopped fresh tomato with the shrimp to make things saucy. But this version packs the most punch with the least possible effort, making a beautiful, restaurant-quality dinner possible even after a busy day at the office and/or wrangling children.

Cajun seasoning, available at most grocery stores, is a fantastic short-cut seasoning: it includes flavorful spices like paprika, cayenne, onion powder, oregano, and garlic powder. All of those bold flavors are seared onto the shrimp, then combined with melted butter and zippy lemon juice and served atop cheesy grits.

The grits, by the way, are lightened up from most Southern versions, cooked with water instead of milk or cream, but still perfectly cheesy and delicious.

Grits are made from dried, ground corn, but in this version, I also add fresh corn for a pop of late-summer flavor. You could also stir in some fresh spinach or chopped tomato.

The division of labor is simple with this one: one person tackles the shrimp, the other handles the grits. Both require very minimal cooking skills, but I’d assign the less-skilled cook the shrimp, since the grits do require you to cut the kernels off of an ear of corn and grate some cheese (tasks that would take me about two minutes, but George closer to 10).

If you take on this meal together, it can be ready on the dinner table in under 20 minutes. Whether you have a strong memory of the last time you ate shrimp and grits, or you’ve never tried it before, I know you’ll love the flavor and simplicity of this weeknight version.

Pat shrimp dry with a clean paper towel and season with salt and Cajun seasoning.

Bring water to a boil in a large saucepan over high heat. Reduce heat to low, add grits, and cook, stirring frequently, for 10–15 minutes, until water is absorbed. Take a bite—if the grits are still hard, add another splash of water and keep cooking. Stir in corn, cheese, salt, garlic powder, and pepper and cook until cheese is melted. Turn heat off and cover with a lid until ready to serve.

While the grits are cooking, heat a large skillet over medium-high heat for several minutes. Oil the skillet by pouring in a small amount of oil, then using a paper towel to carefully spread it all over the skillet. Add shrimp in a single layer and cook for one minute, until shrimp are opaque and the seasonings start to blacken. Flip and cook for one to two more minutes, then remove skillet from heat and stir in the butter and the juice from half of the lemon, scraping up any bits that are stuck to the pan.

Divide the grits between two plates or shallow bowls. Top with shrimp and be sure to scrape all of the lemon-butter over the top. Garnish with parsley. Cut the remaining lemon half into wedges and serve alongside.

Make your grits more decadent by cooking them in whole milk instead of water, or swapping in 1/2 cup of heavy cream in place of 1/2 cup water.

Can’t find stone-ground grits? Use polenta instead! Polenta is coarser, but makes a great stand-in.

Check out my vegetarian version, Shrooms n Grits, in my cookbook, “Just Married.”