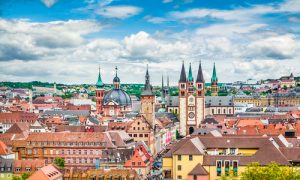 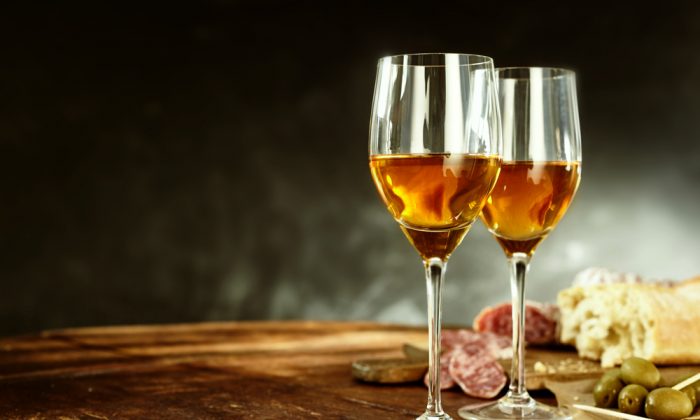 A glass of sherry with tapas is a quintessential Spanish snack. (Shutterstock)
Drinks

Sherry, From Dry to Sweet

One of the many pleasures of visiting Spain is sipping a chilled glass of dry sherry while nibbling on tapas, the little bar dishes served throughout the country in the late afternoon. Meeting for tapas is the essence of Spanish social culture and a way to tide oneself over before dinner, which is usually a late-night affair.

The climate is hot and dry—nearly 300 days of sunshine—and the land is covered with a chalky white soil called albariza. That soil, which has been compared to that of Champagne and Burgundy in France, is beneficial for cultivating Palomino Fino, the primary variety of white grapes used to make all sherry, for a few reasons.

The soil’s composition includes chalk, limestone, and sediments from fossils and plankton (the area was once covered by the sea), which are beneficial for making wines with good age-ability, and can add a salty, mineral character to drier styles. Its whiteness also reflects the sun, to allow for even maturation of the grapes.

Sherry isn’t just one wine. There are seven styles, ranging from bone-dry Fino and Manzanilla, to toasty Amontillado and semi-dry Oloroso, to sweet Pedro Ximénez and cream sherry. Palo Cortado is a rare dry sherry, prized by connoisseurs.

The process to make sherry is complex. Only three white grapes are used: Palomino Fino is the base grape for all styles, while sweeter sherry styles may also contain Moscatel or Pedro Ximénez.

Grapes are crushed and the juice is fermented in either steel tanks or barrels filled only three-quarters full, to allow for air to flow in and oxidize the wine. Producers refer to this as “dos puntos,” or “two fists of air,” wine educator Karen MacNeil notes in “The Wine Bible.”

During this time, wild yeasts, called flor, form on the fermented juice. These yeasts help preserve the wine’s freshness, which is essential for drier styles of sherry.

Sergio Martínez, cellar master for sherry producer Bodegas Lustau, explained: “This veil of flor naturally grows on the surface of the wine, protecting it from excessive oxidation and creating a balance between the sugar and alcohol levels. This differentiates Fino and Manzanilla sherry from other fortified wines, and creates their crisp, toasted almond character.”

The base wine is then fortified with a neutral grape spirit, usually from the native white Airén grape, to raise the alcohol level. To make medium-dry and sweeter sherry styles, the alcohol level is raised to 17 percent or higher, eliminating any remaining flor and allowing for more oxidation.

“The length of oxidation varies depending on the character of the wine you are looking to achieve,” Martínez said. “To our standards at Lustau, an oxidative wine should have at least eight years of aging, and much longer, 30 years or more, for our very old and rare sherry (V.O.R.S.).”

Sherry is made through a unique blending method called the solera system. Dark barrels (called botas) of unblended wines of varying vintages are stacked, oldest wines on top and youngest on the bottom, so that the older wines slowly drip downward through the barrels, blending with the younger ones.

“The blending enables maximum quality, while maintaining a consistent personality with the wine’s [style],” Martínez said.

The blending process started as a way for sherry bodegas—the name for wineries in Spain—to produce, age, and sell more wine to keep up with growth during the 19th century, notably for countries like England and Holland, Martínez said.

Eventually, “this became the standard system for making all sherry,” he said, though “there still is a small percentage of sherry wines that are barrel-aged from a single vintage.”

All sherry is aged for at least three years in oak casks—and much longer, even decades, for finer and rarer styles. Since the wines are blended, the bottles don’t contain specific vintage dates; however, rarer sherries can be designated V.O.S. (aged over 20 years) and V.O.R.S. (aged over 30 years).

The designation Jerez-Xérès-Sherry reflects the global heritage of this region and its strategic location near the port of Cadiz.

Ancient Phoenician ship merchants referred to the region as Xera, the Romans called it Cere, and the Moors from North Africa called it Sherish. The Spanish adopted the name Jerez, a nod to Jerez de la Frontera, which served as the border between Moorish Spain and the north; while British merchants referred to it as Sherry, which was easier to pronounce. They also called it sack, after “sacar,” the Spanish word for “to take.”

However, when political relations between the two countries disintegrated in the 1500s, British sea captain Sir Francis Drake attacked the port of Cádiz and took a haul of sherry back to England for his countrymen to enjoy, according to Jesus Anguita, archivist and historian for sherry bodega Gonzalez-Byass.

The British brought their drinking customs to colonial America—including sherry. In 18th- and 19th-century America, sherry was considered both a stylish libation and a curative tonic. “In days of yore, pharmacists often prescribed sherry as a nerve tonic, or as an antidote to insomnia,” wrote mixologist Warren Bobrow in his book, “Apothecary Cocktails.”

In 1933, sherry became one of Spain’s first wines with a “denominación de origen” (“designation of origin”) status, which established strict guidelines, from where the grapes are cultivated to the methods of production. This was important to ensure that no other country or region could produce and label a wine as “sherry.”

Throughout the first half of the 20th century, wars and political unrest in Spain and the rest of Europe affected the sherry economy. Another factor was American Prohibition, which banned the commercial sale of all alcohol in the country. Over time, consumer taste preferences changed, and sherry took a back shelf at many bars.

But not for long.

What many producers refer to as “the sherry revolution” began toward the start of the 21st century. The revival was led by producers like Gonzalez-Byass, which created the international Copa de Jerez forum and competition to educate bartenders, sommeliers, and chefs on sherry’s diversity, both as a cocktail ingredient and as a wine to pair with food.

This movement coincided with a growing interest in Spanish food and wine, thanks to innovative Spanish chefs such as Ferran Ádria, Juan Mari Arzak, and Joan Roca; as well as U.S.-based chefs, including Jose Andrés, who helped bring modern Spanish cooking to his restaurants in America.

This is certainly the case with sherry, a beverage that has both endured the test of time and endeared itself to new generations of wine consumers who appreciate its history, heritage, and range of styles.

A Guide to Sherry Styles

Thanks to its range of styles, sherry can be enjoyed throughout a meal and with many dishes. Here is a quick overview.

Manzanilla is a dry sherry with flavor notes of blanched raw almonds, apple essence, and chamomile flowers, which are grown in the area called Sanlucar de Barrameda where this specific sherry is produced. Enjoy with creamy cheeses like Brie and Brillat-Savarin.

Fino, also dry, tastes of roasted almonds with a hint of brine. It’s the most widely produced dry sherry and traditionally paired with Spanish jamón, toasted nuts, and olives. It also pairs well with sushi, especially oilier fish like mackerel and tuna.

Amontillado is a dry sherry with more aging, resulting in a slightly more oxidized style. The result has a toasty aroma and nutty flavor. Pair with creamy fish chowders and Asian curries.

Palo Cortado is a dry aromatic sherry with a deep amber color and notes of roasted walnuts and orange peel. Enjoy with seafood paella, roasted pork, and hard aged cheeses.

Oloroso is an aromatic semi-dry, mahogany-colored sherry with notes of allspice, toasted walnuts, and dried currants and fig. Pair with duck and game, savory casseroles, and aged hard cheeses like Gouda and aged Manchego.

Pedro Ximénez is a dark, sweet sherry. The grapes are first air-dried on straw mats to achieve an intense sweetness, before being made into wine. Pair with crumbly blue cheeses or drizzle over vanilla or chocolate ice cream.

Cream sherry is a sweetened Oloroso. Styles can range from chocolate and licorice to sweet roasted figs. It’s popular served chilled on the rocks, and is also delicious drizzled over warm butter cake or French toast.

Once opened, bottles of dry sherry should be consumed within a few days; semi-dry styles can last a few weeks if refrigerated or stored in a cool place.