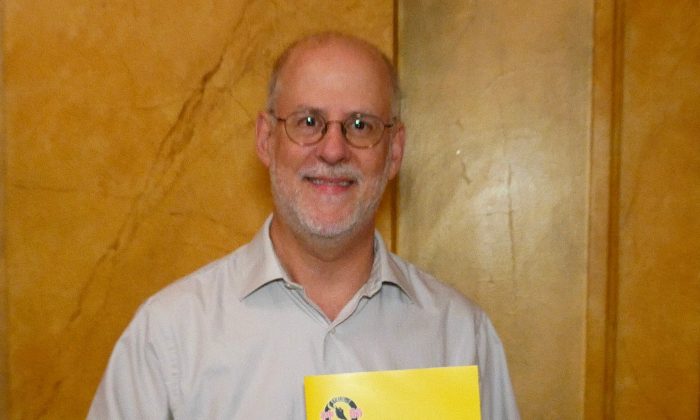 Dr. Richard Sobel at the Academy Of Music on Jan. 8, 2016, after attending Shen Yun Performing Arts. (Courtesy of NTD Television)

PHILADELPHIA—Sometimes we have to look beyond superficial differences to find deeper similarities.

Dr. Richard Sobel should know, he is a clinical assistant professor at the Thomas Jefferson University Hospital with a specialization in psychiatry.

When he saw Shen Yun Performing Arts at the Academy Of Music on Jan. 8, at first he was excited to see something completely different from Western performances.

So graceful, and yet powerful at the same time.
— Richard Sobel

“So graceful, and yet powerful at the same time. Very different than the dancing we all often see here,” he said.

The movements, postures, and approach of classical Chinese dance are distinctly and inherently those of traditional Chinese culture, according to the Shen Yun website, and very different from those of Western ballet.

“Powerful, the dancers are so graceful. As if they are not working hard at all but you know that they are. And, when you see the leaping and the somersaults, its just such physical power, such human power. It’s very, very inspiring,” Dr. Sobel said.

Through classical Chinese dance, New York-based Shen Yun aims to revive the authentic traditional Chinese culture. The foundation of this dance were developed over the 5,000 years of China’s history.

However, over the past 60 years, systematic campaigns by the Chinese Communist Party (CCP) like those of the Cultural Revolution have almost completely destroyed this traditional culture. Thus, though the form of the arts survived, the profound meaning they were intended to convey was nearly lost.

“It’s very important to keep the culture alive. So hopefully, at some point of the future, those who live in China will still be able to see this,” he said.

In the end, Dr. Sobel, who is also a specialist in human behavior, realized there are similarities between Western and Chinese culture and that we can overcome our differences, whether they are internal and external.

“I think [knowing the traditional culture] will help instill a different kind of pride. I think we have too much pride in military power, in the sense of being able to dominate other people, and it is much more important that we recognize the similarities we have with each other. And, feel pride in who we are, and not in whom we can overcome.”