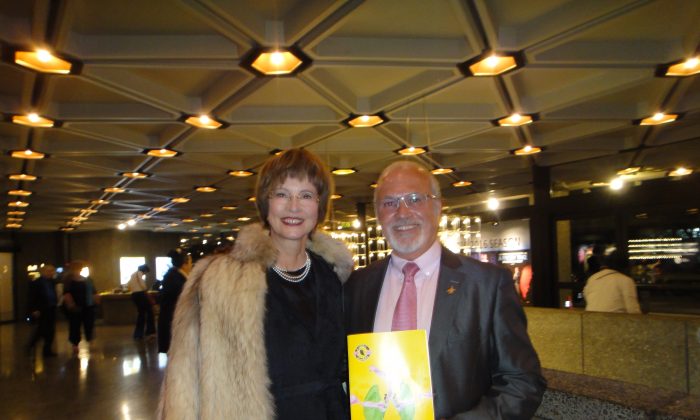 Robin and David Oickle appreciated Shen Yun’s efforts to revive the traditional Chinese culture and the lessons it has for today’s modern society. The couple attended the performance at the National Arts Centre in Ottawa on May 8, 2016. (Dongyu Teng/Epoch Times)

OTTAWA, Canada—Shen Yun Performing Arts touched theatregoers on Sunday, May 8, leaving some longing for a return to simpler days and righteous traditional values.

It was a busy Mother’s Day at the National Arts Centre where the classical Chinese dance and music company played two sold-out shows. The company normally presents four or five shows in the nation’s capital during the holiday season in December and early January, with packed and sold-out shows not uncommon. But in this 10th-anniversary year for Shen Yun, with only two shows in Ottawa during the renowned dance company’s packed global tour, those shows were in especially high demand.

“It’s one of the best shows I’ve ever seen in my life,” said Virendra Kumar, a retired engineer and real estate investor.

Shen Yun presents a unique orchestra that combines traditional Chinese instruments such as the erhu and pipa backed by a Western symphony. The company’s program, all new every year, also features colourful costumes and a state-of-the-art digital backdrop.

It just brought tears to my eyes, before they even started dancing.
— Veronica Brooks

It takes its audience on a 5,000-year journey of the Chinese civilization mainly through the vehicle of classical Chinese dance. Shen Yun, with four touring companies performing around the world, was founded on a mission to revive China’s divinely inspired culture.

It didn’t take long for the touching performance to make a profound impact on Veronica Brooks, who attended the afternoon show.

“The opening of the curtains and all the lovely ladies that were there, it just brought tears to my eyes, before they even started dancing,” she said.

Mr. Kumar, who came to the evening show, said he appreciated Shen Yun’s efforts to revive the traditional culture of China, which has been suppressed under decades of communist rule. To him, the values of peace, harmony, and contentment came through in the performance and resonated with his Hindu upbringing.

It made him feel very good.

“I know that when there is harmony and force of love and compassion, eventually it always takes over. So I was very pleased,” Mr. Kumar said.

“It’s wonderful for them to share that, because everybody needs to hear that—to realize that we’ve been each created for a reason, a purpose, [and] that we respect our creator, one another, we treat each other with love and respect and appreciation, and for the beauty of the world all around us,” said Ms. Brooks, a retiree who used to work for a cancer clinic in Vancouver.

David Oickle, who recently retired from the military and public service, said there is something worth holding onto from the simpler times captured by Shen Yun.

“In a large way we’ve lost our spirituality and this shows you that we can be a bit more grounded, less caught up in our daily lives, caught up in all the work that we do and the technology that we have,” he said.

“It’s kind of reaching out to our spiritual side, which I think has been neglected a lot in today’s world,” he said.

Siobhain Broekhovan, a high school teacher who attended the afternoon show with her brother and mother, said culture and spirituality are important and that they can get quashed in today’s world.

“The idea that we have meaning to our life and that we have this greater calling, not to just make stuff and consume stuff, and make more stuff,” she said.

“Today when we talk about Chinese people, we talk about communism and this great big machine of making products and all this stuff, and that’s… actually, I don’t think that’s Chinese culture.”

“The beautiful spirit of these young people that are going all over the world; it’s going to change the world’s thinking about China.”

When asked what she’d say to Shen Yun’s artistic director, Mrs. Oickle said, “I would bow. I would say thank you and I’d probably start to cry because he’s done so much.”