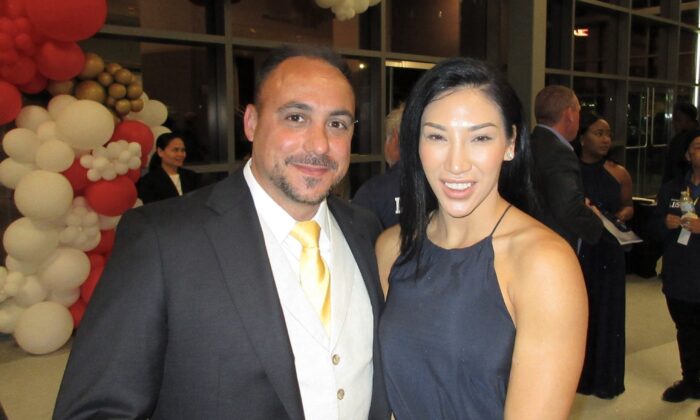 BATON ROUGE, La.—Chinese traditional culture was known as a divinely inspired culture, originating under the auspices of deities who shared their knowledge with mortals through the arts. Dance, music, painting, and writing were considered to be channels of knowledge that came from heaven.

The mission of Shen Yun Performing Arts is to revive authentic Chinese culture, which has been all but lost in mainland China.

When the company played at the River Center Theater for Performing Arts in Baton Rouge, Jason Bourgeois and Tatiana Savage had a wonderful experience, learning far more than they ever expected.

“I think it’s fascinating,” said Mr. Bourgeois, who owns the company Signal ADA Security. “[It] makes me want to learn more about Chinese culture and history.”

Shen Yun’s classical and folk dances offer the audience a journey through storytelling through China’s 5,000-years of civilization. The performance resonated with Ms. Savage.

“I’m Mexican and Chinese and I really enjoy the culture and I love all of the materials and how they flow. I did some designing previously before I was a nurse, and I appreciate all the costumes and the colors are so vibrant and beautiful. The dance is beautiful as well,” she said.

Ms. Savage complimented the artistry, the harmony, and the colors of the show.

“It’s just so amazing and mesmerizing, the way that they move and the storylines as well,” she said. She noted that the dances depict both comedy and emotion. The joyful expressions on the dancers’ faces showed how happy they were, she said.

“[The movements are] so smooth, everything just flows so magically. It’s really amazing to see,” said Mr. Bourgeois.

Mr. Bourgeois said Shen Yun’s narratives had piqued his curiosity. He enjoyed the dance titled “Monkeying Around in Paradise” immensely, saying it was funny and exciting but also silly.

“The Restaurant Tale,” a comedy about rivalry between restaurant owners, resonated with Ms. Savage.

“My mother owned a restaurant when I was a child. So it kind of brought me back to that childhood memory of … how competitive it can be and how to stay humble and be friendly and care for others,” she said.

Shen Yun’s use of technical innovation impressed the couple.

“I think it’s a really interesting blend of the technology and the live-action and the transitions are very well done and entertaining at the same time,” said Mr. Bourgeois.

Ms. Savage agreed. “The colors are just so crisp. The lighting in the production, how it hits the materials, and it’s just so crisp and clean and so bright and vibrant. It’s incredible.”

Mr. Bourgeois commented on the spiritual aspect of Shen Yun.

“It was it guess new to me to learn about the understanding of the origin of divine creatures and the origin of Chinese culture. I’ve never seen or heard that before,” he said.

Ms. Savage said it was a great experience to watch Shen Yun and her first real opportunity to learn about her Chinese heritage.

The Epoch Times is a proud sponsor of Shen Yun Performing Arts. We have covered audience reactions since Shen Yun’s inception in 2006