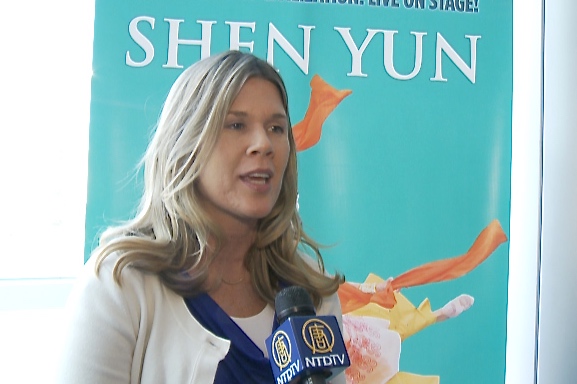 AUSTIN, Texas—”I loved it, I absolutely loved it,” said author and speaker, Wanda Cooper after experiencing the wonder of Shen Yun Performing Arts at the Long Center for the Performing Arts on Dec. 29.

This is the second year she has seen the New York-based Shen Yun with her two daughters. She said, “We love it. We absolutely love it. It has been really fun.”

Shen Yun is based in New York and started with one company in 2006 and now has four companies which tour the world simultaneously.

The peace, the tolerance, and the acceptance of others, that was just really powerful to me.
— author and speaker, Wanda Cooper
Ms. Cooper was really touched by the performance and revival of traditional Chinese culture. She was in tears speaking to the reporter. “Honestly it makes me cry. It’s really beautiful,” she said. “Truly there were several times I teared up because I realized how different the Chinese people are from what they are depicted in the news because of the truth of their actual culture.”

“The peace, the tolerance, and the acceptance of others, that was just really powerful to me.”

The website states, “Shen Yun’s mini-drama pieces draw upon stories and legends that span China’s history from the Yellow Emperor and through the Tang and Song dynasties and all the way to the modern day.”

Ms. Copper appreciated these stories. “I like the way that they weave in different dance clips with stories of the people,” she said.

The skill level of the dancers amazed Ms. Cooper. “The performers make it look so easy; it is almost as if I think that I could do it, but there is no way I could move the way that they move.”

The blend of traditional Chinese instruments with the classical Western instruments playing original scores was a delight for Ms. Cooper.

“The music is so different; it’s like it’s cultural classical music but with the Chinese instruments. It’s just different enough to make it so fresh and new.”

Reporting by NTD and Leigh Smith