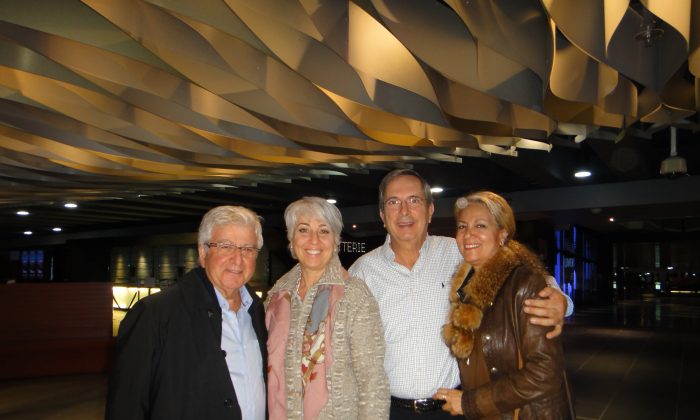 Entrepreneur Tony Arida and his wife (R) and their friends Fouad Sahyoun and his wife attended Shen Yun Performing Arts at Place des Arts on May 1, 2016 in Montreal, Canada. (Dongyu Teng/Epoch Times)
Canada

MONTREAL, Canada—Audiences are discovering the depth and beauty of traditional Chinese culture as Shen Yun Performing Arts continues on its tour of Eastern Canada.

After two shows at Montreal’s Place des Arts on May 1, many theatregoers remarked on the spirituality that came through in Shen Yun’s performance of classical Chinese dance and music.

“We’re learning a new side of the spirituality, the Chinese side, and it’s very interesting and enriching too,” said entrepreneur Tony Arida, who attended the performance with his wife. “I like to learn about other cultures and that was the good part, you learn something new.”

Engineer Fouad Sahyoun, who along with his wife attended the performance with the Aridas, said the experience was soothing and spiritual.

“I felt like I was in meditation mode,” he said. “I feel relaxed and light.”

China was once called the “Land of the Divine,” where its flourishing dynasties were rooted in a spiritual culture based on the philosophies of Buddhism, Taoism, and Confucianism. That all changed when the current regime came to power and enforced a strict policy of atheism while systematically destroying the spiritual heritage to make way for communist ideology.

Recognizing that the traditional culture and art forms were nearly extinct after decades of suppression by the Chinese regime, Shen Yun artists set out on a mission to restore it. Since 2006, the New York-based company has travelled the world, playing for millions of people at the world’s top theatres.

“It feels very special to get to see such a performance,” said Pierre Louis Valet, an entrepreneur who brought his partner, Caroline Theberg, to the show for her birthday.

“It gives me a feeling of lightness,” added Ms. Theberg, who works as an acupuncturist. “It is very original, it’s entertaining.”

Denise Lafleur said the spirituality deepened every aspect of the experience and was “nourishing for the soul.”

“The inspiration was divine in the dances. I liked those very much, those that were the most spiritual,” she said, adding that the choreography was harmonious and balanced. “It was amazing.”

A former yoga teacher, she was inspired by the dancers’ positive energy that she said emanated from the stage. Many of Shen Yun’s artists practise Falun Dafa, a traditional meditation and self-cultivation practice rooted in China’s ancient culture.

“It is a beautiful energy,” she said. “It is a strength. I can feel the strength of their energy comes from their soul and from their belief. And it is translated into their dance.”