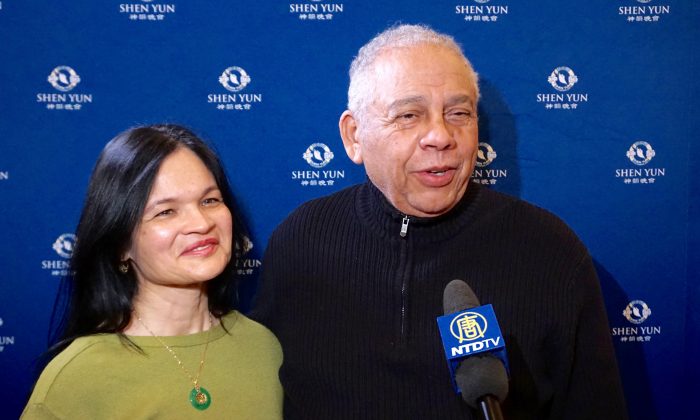 WASHINGTON, D.C.—”I see God,” said Danny Garcia, an ordained minister, about how he relates to the message of Shen Yun. “God created all the men and … there is a place … where we are one with God,” he said.

Rev. Garcia spoke to a reporter just after seeing Shen Yun Performing Arts at the Kennedy Center Opera House on Feb. 19. He and his wife Jacqueline Garcia, a systems engineer, were both very touched by the spiritual message they felt throughout the performance.

From the dancing to the music, to the expressions on the performers faces, Reverend and Mrs. Garcia agreed that the message connected them with God. “We are one with God,” Rev. Garcia said.

Shen Yun’s mission to revive the divine culture of China and share it with the world resonated with Rev. and Mrs. Garcia. Through artistic expression of an almost-lost culture, the New York-based company shares an underlying message of belief in the divine and harmony between heaven and earth. This is at the core of the 5,000-years of Chinese civilization, and something the couple felt was universal.

“We’re here on earth but then we pass from here to another place,” Rev. Garcia said. “That place is heaven. That place is paradise.”

Mr. Garcia has physically walked more than 26,000 miles around the world sharing a message of God’s love. He walked more than 3,500 miles on behalf of the Children of Our World and World Peace, states the Global Walk International website. Along the way, he has presented dignitaries and world leaders with symbols of peace.

He said several years ago he saw a Shen Yun performance and presented the dance company with a humanitarian gift.

This year, he thought the show had gotten even better and said, “I don’t care where you go to church, what country you’re from, what language you speak, you should come and see this.” He added that the spiritual message is the same spirit that is in all of us. So although the performance depicts stories from ancient Chinese culture, anyone can relate to it.

Mrs. Garcia couldn’t choose a single favorite dance performance, saying, “they’re all so wonderful.” But she did note that scenes of modern-day persecution of Falun Gong practitioners touched her heart. “Even today expressions of faith are diminished, but yet that expression of faith is so important to who we are as human beings,” she said.

“Falun Gong is a self-practice system that combines ancient Chinese teachings with meditation exercises,” states the Shen Yun website. It teaches adherents to live with truthfulness, compassion, and tolerance. The crux of the belief is to strive for self-betterment and put others first. Many of Shen Yun’s artists are Falun Gong practitioners.

This belief system is practiced by millions of practitioners around the world, but Chinese practitioners have been persecuted in China since 1999.

Mt. and Mrs. Garcia were also touched by the orchestra’s special sound. The East-meets-West orchestra combines the music of a Western orchestra with leading melodies of traditional Chinese instruments. The uniqueness of these very different musical systems is what makes Shen Yun stand out.

As a child, Mr. Garcia was influenced by his father, a highly respected percussionist who played with well-known musicians. Throughout his own career, Mr. Garcia has produced concerts for famous groups such as the Beach Boys.

He was amazed at how well the orchestra worked together. “Unity, they have such unity,” he said. He also would like to produce a concert with the Shen Yun orchestra. “They’re very gifted, they’re very talented,” he said.

The combination of artistic elements also moved Mrs. Garcia. She said from the very first gong she could hear how each instrument in the orchestra integrated with the music and the dance. “To say that it’s moving is an understatement,” she said.

In summing up her experience, Mrs. Garcia said, “We’re very grateful for the Shen Yun artistry and profession and the gift to the world.”