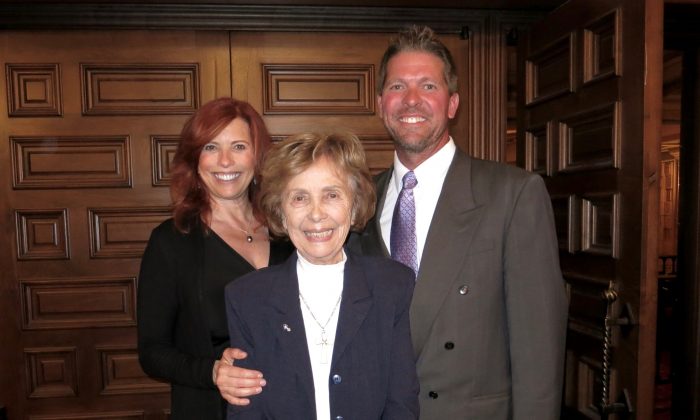 Movie producers Kimberly Eastwood and her husband Shawn Midkiff celebrate the birthday of Kimber's mother Roxanne Tunis, an actress. The ladies are the daughter and wife of Clint Eastwood. The celebration included attending Shen Yun Performing Arts at the Granada Theatre in Santa Barbara on April 30, 2016. (Courtesy of NTD Television)

Kimber Eastwood, makeup artist and film producer, was thrilled to attend the show with her husband, actor and producer Shawn Midkiff, and her mother, Roxanne Tunis, whose 86th birthday was celebrated.

Kimber Eastwood is the daughter of legendary actor Clint Eastwood. Her training and entrepreneurial skills as a make-up artist allowed her to develop a career as a film producer. She and her husband’s latest film was an inspirational piece, “Trew Calling.” “We did a positive, inspirational film last year in Buffalo, New York. That’s what we like. We enjoy the inspirational movies,” Ms. Eastwood said.

Sophisticated dance techniques, an orchestra joining instruments from the East and West, beautiful costumes, and a stunning backdrop—this is Shen Yun at first glance. But digging deeper, one discovers a sea of traditional Chinese culture built upon the beliefs of Confucianism, Taoism and Buddhism. The concepts of “man and nature must be in balance,” “respect the heavens to know one’s destiny,” have constantly played out over a period of 5,000 years, according to Shen Yun’s website.

Ms. Eastwood considers the message behind Shen Yun programs very “uplifting and spiritual,” and it was “what the world needs today.”

Mr. Midkiff added, “Yes, it was very positive, good story telling, very easy to follow.” He noticed the theme of the stories, “It shows that good always prevails.”

The Shen Yun show features bel canto vocalists who sing in Chinese with the translation projected on the backdrop. The lyrics brim original works with philosophical reflection about human life and contain deep layers of meanings.

Ms. Eastwood found her own belief resonating with the messages expressed by Shen Yun’s lyrics. “The words to the songs were really spiritual. We love the message. Some people think we come from evolution. They forget about God. But that’s where we come from. We come from heaven. And that’s the message we have to believe in. We forget that as we go along in this crazy world,” she said.

The couple was amazed by the animated digital backdrop and the music. “It was very different. The dancers fading up into the moon and becoming a star and then they come back! Very unique,” Ms. Eastwood said.

Mr. Midkiff added, “The music was wonderful. The singers were amazing. They have the [live] orchestra. It’s very important. And the two-string instrument [the erhu] was incredible.”

With a big smile on her face, Ms. Eastwood said, “My mom really wants to see this. This is her birthday present.”

“It was great, it was great! I used to be a dancer and I really appreciate the dancing. I loved all the photography and the background, just everything. Everyone’s great!”

Ms. Tunis particularly loved the costumes. Shen Yun’s costume artists collect countless designs of traditional attire, ranging from those of emperors, ministers, and generals to the everyday clothing of the common people. They use bright colors to tailor and recreate hundreds of new pieces each season. Every detail is given meticulous attention and is a result of artistic inspiration and careful polishing.

“The costumes are just unbelievable, absolutely fabulous. The dancers are great. I am overwhelmed. The show is spectacular,” Ms. Tunis said.