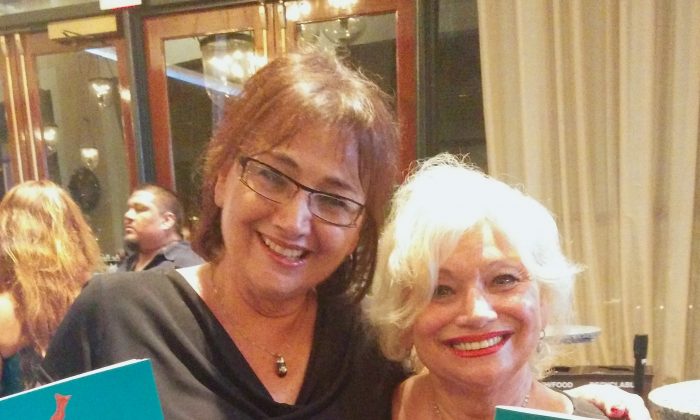 Bella Kotler and Shirley Roscn pose for a photo at the Au-Rene Theatre, Broward Center for the Performing Arts on Dec. 26, 2014. (Jada Yeung/Epoch Times)

FORT LAUDERDALE, Fla.—”It was spectacular,” said Bella Kotler after she attended opening night of Shen Yun Performing Arts with her friend Shirley Roscn at the Au-Rene Theatre, Broward Center for the Performing Arts on Dec. 26.

Ms. Kotler, self-employed in the promotional product industry and Ms. Roscn, a real estate agent, were most impressed with the artistry and magic of New York-based Shen Yun.

“I was most impressed. The scenery is outstanding, the costumes were astounding, the dancers are in sync, they are fabulous. I really think the talent was incredible,” Ms. Kotler said.

“What impressed me most was one of the acts, the drawing act, the painting was magnificent,” Ms. Kotler said referring to ‘The Fable of the Magic Brush’ where paintings become reality under the craftsmanship of a pure heart.

According to the Shen Yun website, “These dances give dramatic portrayal to the cherished stories of past and present. Their figures embody the most exalted virtues of Chinese civilization, and convey a message or moral that is still relevant in our day. Many have inspired people for generations.”

Ms. Kotler was particularly touched by the final performance, ‘The Divine Renaissance Begins.’

“The finale was very, very good. I found the finale excellent,” she said. “I just think colorful, beautiful, it was beautifully done.”

Ms. Kotler found “The music was lovely. I found sometimes—it was very soothing.”

Ms. Roscn said “It is a show that should not be missed, by everyone.” Ms. Roscn said.  “It’s just—it’s spectacular. It’s was absolutely worth coming to and viewing.

“I am just so happy that we came to see it. Truly, truly, I hope it runs for a long time and lots of people come and visit.”

With reporting by Jada Yeung and Leigh Smith