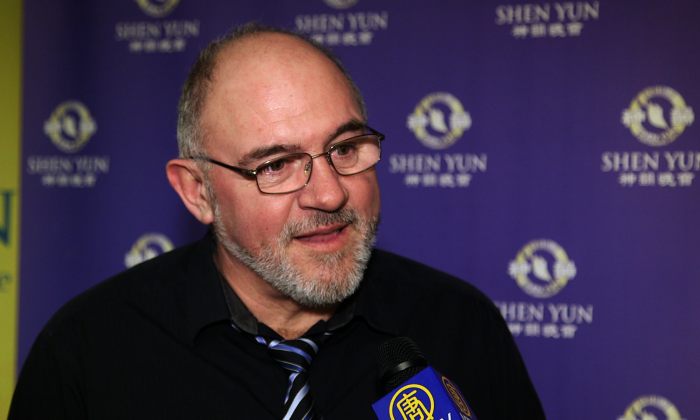 Chris Grouve at the Shen Yun performance at the Place des Arts in Montreal on Apr. 30, 2016. (NTD Television)

MONTREAL, Canada—China was once known as Shen Zhou, or “the Divine Land.” As cited by the website of Shen Yun Performing Arts, the world’s premier classical Chinese dance and music company, “This profound name describes a land where deities and mortals coexisted, and a belief that the divine transmitted a rich culture to the people of the earth.”

Based in New York and consisting largely of overseas Chinese artists, Shen Yun has taken it as its mission to revive China’s divinely inspired culture, which was all but destroyed under decades of communist rule.

For Chris Grouve, manager of a private club, this revival of the ancient culture by Shen Yun is very important.

“In order to save the world, that’s exactly what we have to do. We have to go towards the divine and create peace and balance in this universe because otherwise we’re destroying it,” said Mr. Grouve, who saw Shen Yun’s opening performance at the Place des Arts on Apr. 30.

“If everyone tried to practice being in balance with the universe and nature, then obviously we’re going to save this planet.”

Shen Yun’s performance, Mr. Grouve said, is very spiritual, and it really resonated with him.

‘Soothing to the end’

Jonathan Hubert, an engineer, enjoyed seeing all the beautiful colours and the dances, as well as hearing the original compositions performed by the Shen Yun Orchestra, which accompanies the dances.

“The mix of music and dance and history, I really appreciated it,” he said.

Accompanying Mr. Hubert was Pauline, who works in marketing and communications. She said she enjoyed seeing the dances and the cultural elements in the performance, which she found very calming.

“It was soothing to the end,” she said.

Attorney Bernard Allard said he was deeply impressed with Shen Yun’s showcase of the ancient culture.

“They are excellent, both the dancers [and the] synchronized dance—beautiful. The costumes are beautiful. It’s special,” he said.