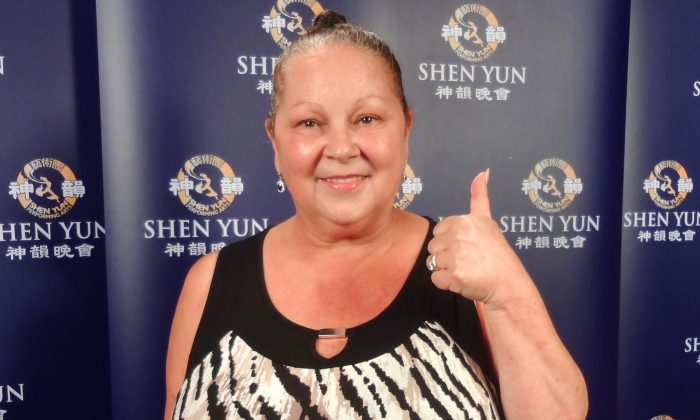 “I’ve been transformed, I feel great, absolutely wonderful,” she said.

She was inspired by “a beautiful cultural message of tranquility and an essence of spirituality, a positive message in this harsh world today.”

For example, in some story-based dances, the old Chinese adage, “good is rewarded, and evil punished,” stood out for her.

“Goodness always overrides evil … that’s how it touched me. The performance itself draws you in, and you’re part of that—the lady that’s moving, you’re a part of that.

“And the message I felt was a very inspirational one, I really do. Amazing culture, and the most beautiful stunning women I’ve ever seen with such elegance and class.”

She said Shen Yun’s aspirations to spread positive messages worldwide would be of benefit to children, in particular.

Ms. King said she was leaving the theatre with “new-found energy of positivity—I’m getting goose bumps—it’s really lifted my soul.”

Based in New York, Shen Yun formed in 2006 to revive 5,000 years of divinely inspired Chinese culture, China’s true heritage largely destroyed after the Chinese Communist Party took power there some 65 years ago.

Now, in its ninth year, Shen Yun has grown to four companies that tour each season to over 100 cities, performing simultaneously on prestigious stages in 20 countries, the world over.

“Absolutely brilliant, an amazing performance,” Ms. King said. “The costumes … I’m speechless, absolutely beautiful, amazing. The men and women were equally as elegant as each other.

“And the synchronisation of the performance—breathtaking, the narrators’ telling the story before each performance, I thought was just brilliant.”

Ms. King was impressed with the digital backdrop screen and how the performers interacted between stage and screen, choreographed to perfectly match the sweet sounds of the Shen Yun symphony orchestra.

“I can’t find the words. Brilliant, amazing, truly inspiring … Makes you want to jump in there with them!”

Ms. King, who sees many different theatrical shows on a regular basis, said Shen Yun was the best performance she has ever seen. “This is, without a doubt, my number one.”

Shen Yun website explains, “Sophisticated dance techniques, an orchestra joining instruments from both the East and West, beautiful costumes, and a stunning back drop—this is Shen Yun at first glance. But digging deeper, one discovers a sea of traditional Chinese culture. Mortals and divine beings merge on stage as one. Principles such as benevolence and justice, propriety and wisdom, respect for the heavens, and divine retribution, all come to life, washing over the audience. Originating from Confucianism, Buddhism, and Taoism, these ideals are the essence of traditional Chinese culture.”

As for the maestro conducting the Shen Yun Orchestra that combines ancient Eastern with classical Western music in original and classical composition, it was mind-blowing, Ms. King said.

“Absolutely mind-blowing! The sound has resonated in my soul. And every time I will hear that sound, I can see the performance. Isn’t that amazing?”

To her, the Shen Yun production was put together in a way that “becomes one great big, massive performance, and it all intertwines.”

Consultant engineer David Collyer and Lyescher Collyer, who works in event media, both had a fantastic time at the Shen Yun performance .

“It’s overwhelming I must say,” said Mr. Collyer, who was impressed with the dancing.

Ms. Collyer said the presentation was very professional. “Their timing and the movements and confidence is just tremendous,” she said.

“It’s something unique. I don’t think there’s any other show that compares with this. And it is really amazing to see them perform.”