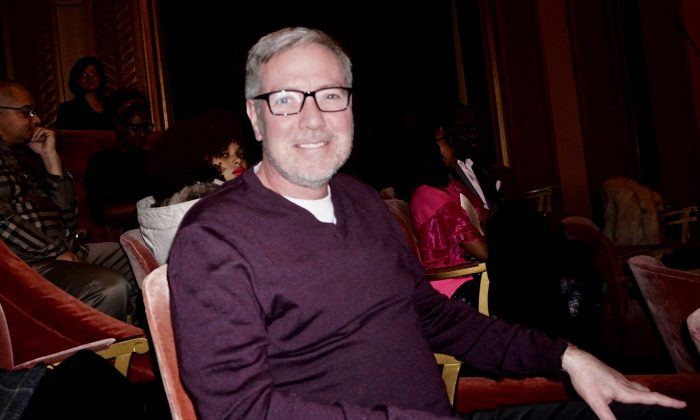 CHICAGO—Brian Logan’s first impression was a good one.

“Its wonderful, I love the energy of the music and the dance,” he said after seeing Shen Yun Performing Arts International Company’s evening performance on Dec. 29, at the Civic Opera House.

Logan is a retired music educator with experience teaching all grades from elementary to college, who specialized in percussion, woodwinds, and band instruments.

“The musicians are wonderful, they’re very, very outstanding … all musicians were absolutely wonderful, brilliant. And nice arrangements too,” he said. “For me the most unique piece, because I am a musician, is the combination of the Eastern and Western instruments to create a cohesive listening experience. So you have those musicians, you have those instruments put together which for me is beautiful and exciting.”

According to the website, “The Shen Yun Orchestra combines the spirit, beauty, and distinctiveness of Chinese music with the precision, power, and grandeur of the Western symphony orchestra. The result—two great traditions producing one refreshing sound.”

“It works very well for this show. The musicians, because they’re all so good, they’re able to blend their sounds beautifully, so they’re in tune, it always makes sense, it’s very good … It’s interesting to hear them combined and to create an outstanding show,” he said.

“They [the instruments] play a specific role, sure, its very beautiful,” Logan explained. “Like when you have the woodwinds, the flutes, it’s a little bit lighter or beautiful at moments. Then you have the big brass sound—it’s more powerful. So all the instruments portray, or the timpani and percussion sometimes when the timpani is playing nice and strong, usually it’s a very masculine dance, it has lots of energy. And so the combination of the instruments, the dancers, and technology really make for a wonderful performance.”

“The music takes us through the entire gamut of emotions, its quite quite wonderful.”

“The music is crucial,” he says. “If you didn’t have this music, it wouldn’t make any sense. The music is what pulls it all together. The dance is magnificent and its beautiful. And then you have the screen and all the visual components. But it’s the music that reaches your heart and soul.”

From the perspective of a music professional, Logan had this to say: “When I hear great music and great shows like this, it just energizes me to want do what I do better. And so I wouldn’t say learned, but I get inspired. And so this makes me inspired to want to make sure the musicians I work with are also performing at a very high level.”

Meaning Beyond the Music

It’s said that China’s ancient culture was divinely inspired. Logan felt this aspect of traditional Chinese culture came through during the performance. He said, “It’s very divine what they’re doing. It’s a very divine production and you feel the beauty of it.“

He felt that the portrayal of traditional Chinese culture came through beautifully, but also felt it was unfortunate Shen Yun currently can’t be shown in China.

“Its dance is very Chinese. So it’s wonderful to have this for American audiences and for us to learn about it. It’s unfortunate once again that China doesn’t embrace it more,” he said.

According to the former music educator, Shen Yun musicians’ skill levels were first rate. They create a world-class performance, and they are outstanding.

“They’re great, great musicians … It’s not just the musicians, we hear it and we see it. It’s like a combination. It’s a symbiotic relationship between the performers on stage and the musicians in the orchestra and that relationship creates wonderful feeling of emotion visually, aurally, and spiritually,” Logan said.

“The storytelling is beautiful, the visual effects they use for the storytelling enhances the entire production, and gives us one cohesive magnificent show.”