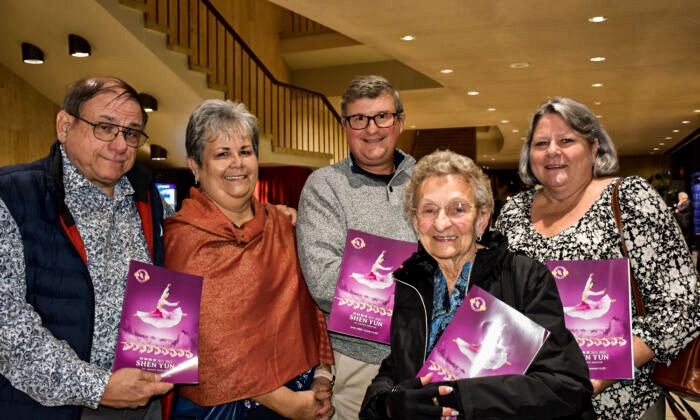 The Higgins couple (L), with their mother, and the Crimmins couple (R) at Shen Yun Performing Arts in Norfolks' Chrysler Hall in Virginia on Nov. 6, 2021. (Sophia/The Epoch Times)

Elizabeth Higgins said that the performance had her “exceeded expectations” after experiencing Shen Yun on Nov. 6 at Norfolk’s Chrysler Hall.

Shen Yun’s dancers and musicians portray China’s spiritual, moral, and traditional culture, which the ancient Chinese believe was a gift from the divine.

“I like the message; that there’s something bigger than us. And the beauty … and the colors, that was just life,” Patricia Crimmins said. “[The message is that there is] hope and that there’s meaning to what we do in life.”

Patricia is an ex-Marine, and both she and her husband Paul played in the Marine Band for over 20 years. Patricia, who was a master sergeant, played the saxophone and clarinet while Paul played the trumpet.

“The music is fantastic!” Patricia said. “It was phenomenal. [It’s] unbelievable what [the erhu player] could do. [She was] very well disciplined.”

The erhu, or two-stringed violin, is a traditional Chinese instrument that can convey a wide range of emotions and sounds. The sounds can range from the chirping of birds to the neighing of horses, Shen Yun explains on its website.

“That was incredible music,” Paul said. “I really liked the mixture between the Eastern and Western sounds. It was moving.”

Both couples were fascinated with Shen Yun’s use of its patented animation technology in the performances.

“Colors were stunning,” Paul said. “Then, [the characters] going from the screen to the stage, from the stage to the screen, that is an amazing thing.”

Shen Yun’s aim is to revive “China Before Communism.”

“I think there needs to be more of it; it needs to be brought back in the way it was brought back tonight,” Patricia said. “Through the artistry, the music, the dance—more people need to see it.”

Elizabeth said she was impressed by the final piece in the program.

“[Shen Yun] are not afraid to express the message because there’s a lot of people that believe the message, of the divine power. Tonight, it was shared with us,” she said.

Husband Bill Higgins was also touched by the story of a Divine Creator. “We should all not stifle our light,” he said. “We need to let His light shine through us and take care of one another.”

“Just the motion, the movement in it, and the motion in it. You know, what they do with the fans? Amazing,” she said.

“[Shen Yun performers] have a gift, and you can see where their gift came from; the Divine Creator gave them that gift. They’re apostles, disciples,” she explained.

Everyone expressed that they had enjoyed Shen Yun enormously and would be returning to see it again.

“[I]t’s great to share the culture. [The Shen Yun performers] just did an outstanding job—their hard work and their dedication,” Elizabeth said.