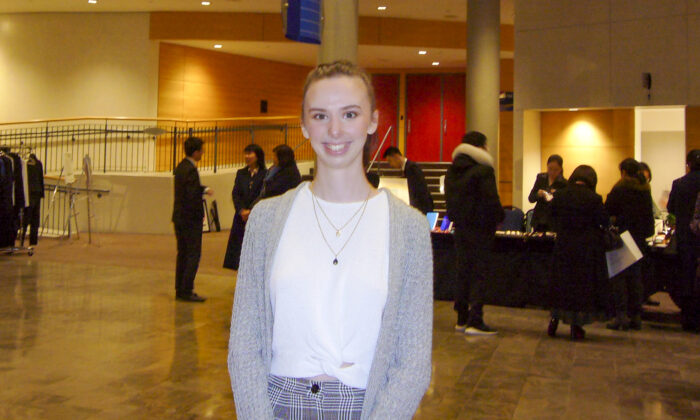 Julia McIntyre at the Shen Yun Performing Arts performance at the Living Arts Centre in Mississauga on March 29, 2022. (NTD)

MISSISSAUGA, Canada—Sometimes music can be a ray of hope during our most difficult times. Shen Yun Performing Arts is spreading a message of hope through its beautiful music and dance.

“I love the live music. I played piano for 14 years. So seeing [the] pianist and sopranos and all of the amazing performers tonight was fantastic. I was waiting to go home and play music for myself again. It was so inspiring,” said Julia McIntyre, a television animator.

Shen Yun, based in New York, is the world’s premier classical Chinese dance and music company, and its singers are trained to sing in the traditional bel canto style that’s believed to produce the most beautiful and pure tone of voice.

“She was amazing. Her voice just lit up the entire room. Everybody just went very quiet when she started to sing,” Ms. McIntyre said. “The notes that she was hitting at the end were insane—so crystal clear, and her vibrato and everything was just fantastic.”

The song’s lyrics reminded Ms. McIntyre of how significant it is to be with other people.

Shen Yun‘s animated backdrop allows the stage to be extended infinitely and uses a patented system to produce a seamless interaction between the background scenery and the performers on stage. For example, you might see the dancers swim in the ocean at one moment and then fly high into the sky the next.

“It was so surprising because I didn’t realize that that was going to happen. So when the characters popped off of the stage and then were suddenly on the screen, I thought it was a fantastic execution and made the show really come alive. And you were really able to feel all of the majesty of the stories that were being portrayed. I thought it was a fantastic inclusion. Magical, absolutely,” she said.

Shen Yun starts off the performance with a portrayal of the beginning of civilization that shows the role played by the divine.

The characters would come alive and were right in front of you dancing. It was an amazing introduction to the culture.
— Julia McIntyre

“As someone who knows very little about [traditional Chinese culture], it was an amazing introduction. And I felt like I could really understand. Even though there weren’t any real words being said, I could see all of the images. And it made it feel so real and so tangible that it was right there in front of you. The characters would come alive and were right in front of you dancing. It was an amazing introduction to the culture,” Ms. McIntyre said.

Through dance and music, without the use of the spoken word, Shen Yun is able to tell moving stories, evoking many emotions from the audience.

“It was electric. It was so exciting and sad and then it was beautiful. So it was like a whole range of emotions that you were brought through the entire show,” Ms. McIntyre said.