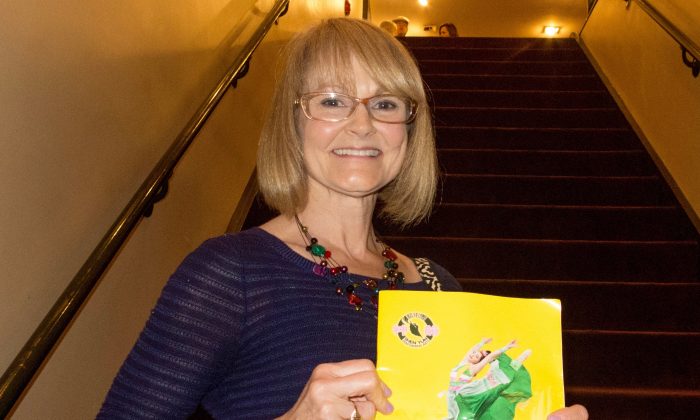 Susan Groeger felt like she was seeing a piece of heaven in Shen Yun Performing Arts, on March 5, 2016. (Alex Ma/Epoch Times)

DENVER—Dancers spun rainbow streams of silk, clad in celestial garb, and Susan Groeger felt like she was seeing a piece of heaven in Shen Yun Performing Arts, “like the dancers were angels, and it was just so beautiful,” she said on March 5.

She absolutely loved the beautiful, uplifting performance which she found spiritually rewarding, she said, after seeing the performance at Denver’s Buell Theater.

One of the nearly 20 dances Ms. Groeger saw performed by the New York-based classical Chinese dance company was “A Joyful Harvest.” In it the dancers dressed in costumes of the northern Chinese countryside and danced in celebration a bountiful crop.

This dance brought the financial representative for Northwestern Mutual back a number of years to her time at Interlochen Arts Academy. One of her teachers, Taiwanese Henry Yu, who had established his own dance company, had taught some moves from a harvest dance. That personal memory made the dance all the more special to her.

More than just a personal experience, though, Ms. Groeger appreciated “the message about religious freedom. We take religious freedom for granted in our country. We don’t realize how painful it is for those who live without it.”

Shen Yun can perform all over the world, but not in China. In the past the communist regime deliberately dismantled the spiritual heritage of the country, and even today those practicing certain faiths are tortured and killed.

Shen Yun “is going to tell the world that the God is real,” Ms. Groeger said. “I appreciate that. That takes a lot of courage, especially for people who now cannot go back home. None of those dancers can go back to China,” she said.

As Shen Yun aims to restore the spiritual heritage of China and it’s 5,000 culture indebted to divine inspiration, its entire program celebrates that inspiration.

In the final dance, the Creator comes to save people, and Ms. Groeger felt it was absolutely beautiful.

Were that day to come soon, she would be ecstatic. “I look forward to that day,” she said.