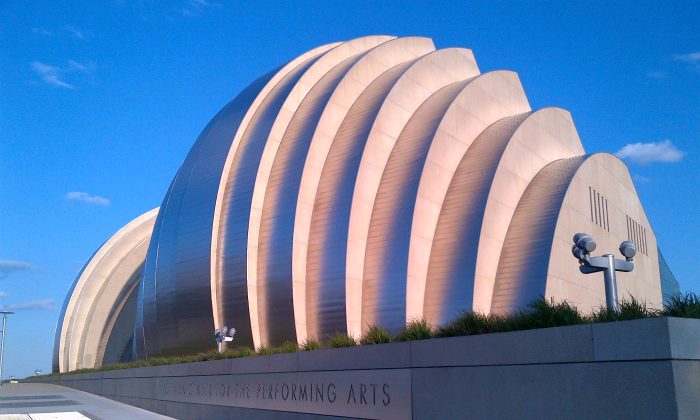 KANSAS CITY, Mo.—“No words can really express the feeling that you come away from this wonderful performance. It reaches into your very soul and pulls out your emotion,” Barbara Edwards said at the Kauffman Center for the Performing Arts.

“I stood up and said ‘Bravo! Bravo!’ … I go to the opera here, so I am used to crying through performances, but this performance—this fluidity, the grace, the strength, the beautiful … movements, everything!” the semi-retired realtor said after seeing Shen Yun Performing Arts with her friend, Vicky MacLean, on April 2.

Ms. Edwards is an art lover. In addition to the opera, she said, she had had an association with an art gallery in the past.

“Oh, my goodness, the artistic director is phenomenal, phenomenal. The backdrops, the cinematography, the integrative things that he … has used in the whole performance, it’s truly marvelous,” she said.

But it wasn’t just the beauty of the performance that moved her repeatedly to tears, it was something more. For her this magnificent performance, which brought an ancient culture to life, was a beautiful journey through life.

Shen Yun takes viewers to distant vistas—from the moon to the sea’s bottom. It takes them to different times—from the 5,000 years in the past when China’s culture was first divinely bestowed, up until the present. All of this is shown through traditional dance and music.

The beautiful journey that Ms. Edwards experienced involved, as she said, a message that went to her very soul. The message was love. “Love and our Creator,” she said.

“There is a message for us. I am sorry,” she said as her voice broke with emotion. “It was [that] we have a God who loves us, who wants us to be happy, who wants us to fulfill our destiny here on earth.

“There is such peace someday for all of us. That is what I get. We are going to be up there someday with God,” she explained.

The performance showed her that God loves all of us, wherever we come from. “God loves us all, he created us all, and we need to remember that.”

Ms. MacLean, a nurse, saw a similar message. Each of us has a spiritual element that needs to be expressed. “And it’s sad that a lot of countries don’t allow that,” she said, referring to the fact that people of faith can be subject to horrible persecution in China, as a couple of Shen Yun’s dances telling stories from modern times showed.

Ms. Edwards said that we have to fight against those who do not have the best interest of people at heart.

“We have to fight against that, and we have to all be together.