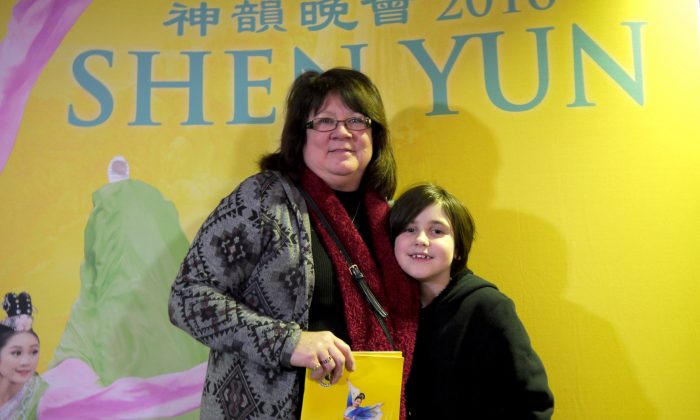 A long-awaited dream comes true for Kennedy, as she sees Shen Yun on Feb. 24 to celebrate her December birthday, accompanied by her grandmother, Nancy Henske. (Catherine Wen/Epoch Times)
City

SPRINGFIELD, Ill.—Shen Yun Performing Arts Touring Company had a one performance stop at the Sangamon Auditorium on the evening of Feb. 24. Many among the theatergoers were multi-generational families who found Shen Yun to be amazing for every age. One such family was the Henskes.

During the holiday seaons, the Shen Yun advertisement brochures at the local store made Nancy Henske’s granddaughter, Kennedy, very excited. Kennedy’s wish was to see Shen Yun for her 10th birthday.

“Her birthday was in December, so we bought tickets then to see it now. She was counting down the days to come,” said Ms. Henske, a district manager for Casey’s General Stores.

“We enjoyed it so very much,” she said. “All of this together, the orchestra, the musical instruments that we’re not used to hearing,” explained Ms. Henske.

Those unusual instruments not usually heard are traditional Chinese instruments, such as the erhu and pipa. They are permanent members among the full Western orchestra assembly of instruments for the Shen Yun Performing Arts Orchestra. Their expressive range complement the dance performances.

As the website explains, Shen Yun graces the stage with beautiful colors, a unique classic style of dancing and original orchestral music, as well as multidimensional backdrops, all for the purpose of bringing traditional culture alive to audiences around the globe.

“It’s sad they can’t do this in their own country and in their own culture,” said Ms. Henske. “I felt empathy and compassion” because of their circumstances.

For decades, the communist party has tried to destroy ancient Chinese culture and almost succeeded. Ten years ago, Shen Yun was formed outside of China with the intent of reviving this ancient heritage.

“I was very proud that they are trying to keep their culture alive, very proud of them,” said Ms. Henske. “Where we come from is important.”

“I think the feeling is loving compassion for another human being –  that is what is keeping their culture alive,” she said.

The cornerstone of Shen Yun is classical Chinese dance. It is one of the ways that the 5,000 years of divinely inspired culture has been passed down. With such a rich history, Shen Yun has much to draw upon. Each performance has a number of story-based dances about ancient legends, beloved characters, historical milestones, and moral behavior.

Performances of different cultures are “very much needed for young people to experience,” said the grandmother.

Her granddaughter agreed wholeheartedly: “It was very cool. A lot of people my age would like it, and they wouldn’t get bored with it,” said Kennedy.

Ms. Henske summarized the performance as amazing and awesome. Her granddaughter responded with, “We want to see it again.” Her grandmother echoed her sentiment.