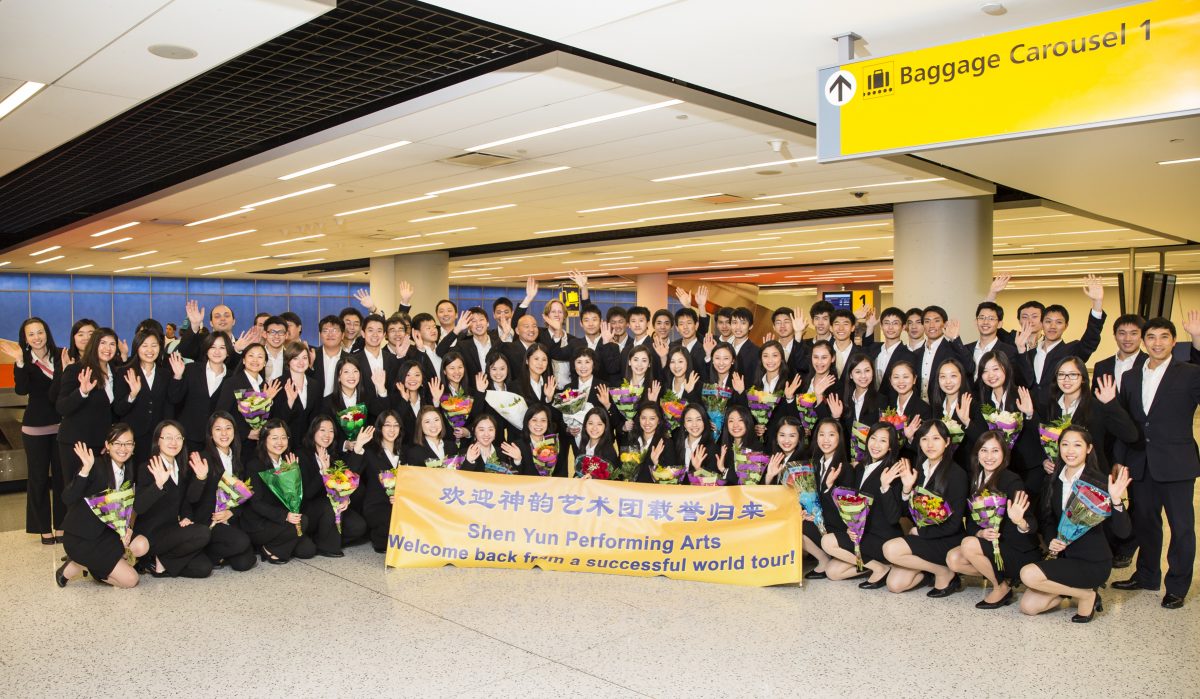 NEW YORK—After performing more than 100 shows in Asia, New Zealand, and the United States, one of Shen Yun’s touring companies returned to New York on May 11.

A group of local fans welcomed the performers at John F. Kennedy International Airport with cheers and bouquets of flowers.

Shen Yun is based in New York. The performance takes audiences on a journey through 5,000 years of Chinese culture. Performances feature the world’s top classically trained dancers, a unique East-West orchestra, and animated backdrops.

“This year’s program is completely different from last year’s. Many audience members were deeply touched and burst into tears upon watching the show,” said Shen Yun choreographer Yungchia Chen at the airport. “Many people commented that they realize how profound Chinese culture is and they all feel very astonished.”

“I feel personally touched because I know how difficult it is to get out of China and watch such a performance. I am also very happy to be able to share the truth with them,” said principal dancer and soprano Rachael Yuning Bastick.

Shen Yun is unable to perform in China because the Chinese Communist Party fears the content of the performance, which exposes the regime’s persecution of Falun Dafa, a popular spiritual practice based on the principles of truthfulness, compassion, and tolerance. Falun Dafa was forbidden by the CCP in 1999 and is brutally persecuted to this day, according to the Falun Dafa Information Center.

Each year, Shen Yun creates a brand new performance. After taking a break from the tour, the performers will move on to create and practice for the next year’s program.

Most of the shows on the International Company’s 2014 tour were sold out. Audiences showered the performance with lavish praise.

“The whole impact is just marvelous, it’s brilliant how they perform; and the outfits and the scenery, it was just magical,” said Nunnally Paterson, a landscape painter and photographer who saw Shen Yun perform in Perth, Australia.

“If I was to pass away tomorrow, I have seen something so spectacular that has touched my soul that I would be happy to go. That is how special that show was for me,” said Delmacine Heyder, a business owner who saw the performance in Auckland, New Zealand.

“Shen Yun’s art is perfect. From all the performances, we can see a lot of ethnic groups and our China’s 5,000 years of civilization,” said Wang Chiu-kuei, the chairman of Taiwan High Speed Rail Corporation, who saw the performance in Taichung, Taiwan.