Shen Yun’s Intensity Is ‘So Meaningful, So Touching’ 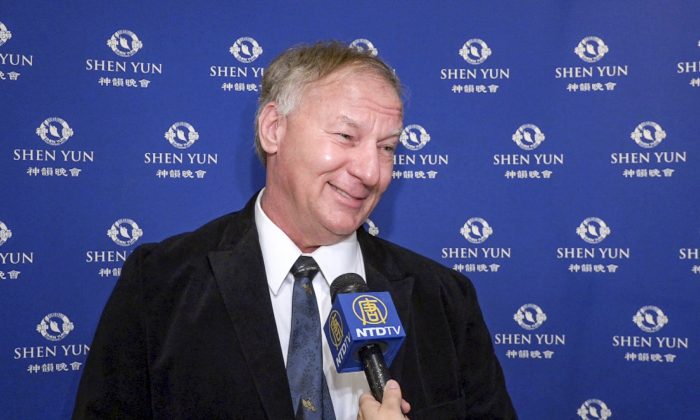 Mitt Richards said the intensity of Shen Yun's heartfelt performance brought tears to his eyes. He saw the performance at Raleigh Memorial Auditorium at Duke Energy Center for the Performing Arts, on Jan. 6, 2019. (NTD Television)

RALEIGH, N.C.—Mitt Richards has some understanding of Chinese culture. As a former emergency medicine physician, he would have patients and now still has students whose parents only speak Chinese—so he is fluent in the language.

But seeing the authentic traditional Chinese culture of 5,000 years brought to life on stage, he was in tears, and in awe, with his newfound understanding.

Richards saw Shen Yun Performing Arts for the second time at the Raleigh Memorial Auditorium at Duke Energy Center for the Performing Arts on Jan. 6, and described the intensity of the experience afterwards.

“I wish I could meet the individuals and bow, shake their hands, or thank them,” he said. “Because the intensity with which they perform, that is what made this performance so meaningful and so touching.”

“They brought that out with their individual eyes, the movements. I was fascinated by how much energy would come out, but it flowed, and there is so much grace,” he said.

“I would like to meet each one and ask them how they would do that,” Richards said.

Shen Yun was formed in New York in 2006 by artists from around the world who wanted to revive the 5,000 years of Chinese civilization. It is a culture once almost lost, due to the decades of communist rule in modern China, where the regime has systemically sought to uproot the traditions and history through persecution and campaigns like the violent Cultural Revolution.

China was once known as the Divine Land, or Celestial Empire, and Shen Yun artists want to show what this lesser known, divinely inspired culture is really like.

Five thousand years of stories, dynasties, regions, and history is a lot to express, but classical Chinese dance is expressive enough to do so.

According to its website, classical Chinese dance is a complex system that goes back thousands of years. The discipline is a rigorous one both externally, with countless specific movements and difficult tumbling techniques, and internally, as the artists have to cultivate “yun,” which can translate into the bearing of the characters they don, or the inner feeling they need to express.

Richards said the experience was like finding something that he had been searching for.

“This sense of peace: I’m looking for that, I look for that,” he said.

He saw in the stories universal messages about conflict, about relationships, people coming together with common goals, love for one another, and the everyday distractions from things that really matter.

“It really goes back to that relationship, and Shen Yun brings this out,” Richards said.

Richards said that in many ways, the performance uplifted him. But it also gave him the stark awareness that there are places in the world where people are not free to believe what they believe. Case in point: The traditional culture Shen Yun artists want to celebrate is not allowed in China, where they are banned.

The culture itself, with the underlying traditional values like benevolence, wisdom, propriety, respect for the heavens, and so on, was thought-provoking for Richards, and something he wanted to learn more about and adopt in his own life.

“We often get distracted, get distracted through personal endeavors,” he said. “It [the stories] brought out that desire to grow and develop in areas.”

“We focus on such a transient electronic device, and it’s relationships that really bring us together, and the sense of creating that love and that spirituality, because that goes onto the creation of the universe,” he said. “This is a very thought-provoking and emotion-provoking performance … all of this brings humanity out.”

Richards said it was so moving because he could sense the performers really meant all these things they were depicting through dance and perfectly timed music.

“The expression of the performers, it was very, very heartfelt,” he said. “Some of the stories that were told through dance, I actually teared up, I cried.”

“The intensity of the emotions and the belief that they had when they would dance, and this dealt with their own views on relationships and love and expression of spirituality, all those things came out for me,” he said. “Next year I plan to return—every year.”