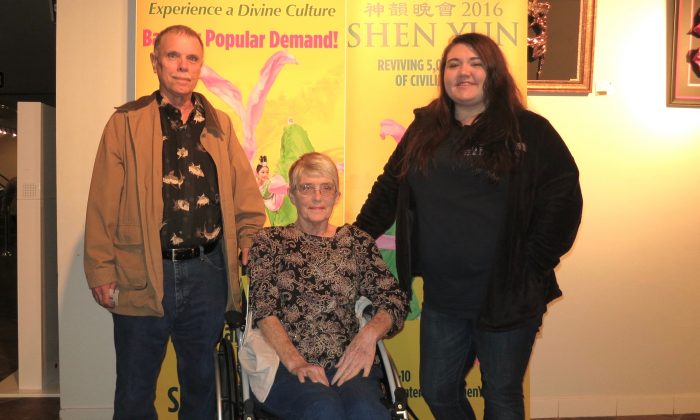 MELBOURNE, Fla.—Linda Hughes had seen Shen Yun Performing Arts in Jacksonville, Florida, and decided she should see the classical Chinese dance and music company again. So she also attended the Melbourne performance on Jan. 20.

A deeply spiritual person, Ms. Hughes felt better—in both body and mind—after seeing the performance at the King Center for the Performing Arts.

It’s an ancient Chinese belief that music can harmonize our souls and heal our bodies. In fact, in China, one the earliest purposes of music was healing. The character for medicine in Chinese comes from the word for music.

Shen Yun’s mission is to restore the traditions and beliefs of ancient China, and it does so through story-based dances supported by a live orchestra. The orchestra plays Chinese melodies atop a full Western orchestra.

One of the composers for the orchestra, Gao Yuan, knows the ancient Chinese philosophy regarding music.

“During the time of the Great Yellow Emperor (2698–2598 B.C.E.), people discovered the relationship between the pentatonic scale, the five elements, and the health [of] five internal and five sensory organs. During Confucius’s time, scholars used music’s calming properties to improve [and] strengthen people’s character and conduct,” he said in an interview appearing on Shen Yun’s website.

Thus, it’s not surprising that Ms. Hughes, who will be undergoing surgery soon, felt the music had a healing effect on her.

“I have felt much better since watching the show,” she said, adding that the music had calmed her. It feels “like my mind is finally relaxing and not thinking about other things,” she said.

Ms. Hughes believes something other than the music may have been at work in how she feels. Her favorite dance was the “Monkey King and the Dragon Palace,” a tale from the Chinese literary classic “Journey to the West.”

In the dance, the Monkey King, imbued with magical powers, is on a quest to find the perfect weapon, and he finds it at the palace of the Dragon King at the bottom of the sea.

Ms. Hughes was charmed by the piece, finding it humorous.

“Humor helps make you feel better,” she said. “When you get humor, you smile and you laugh. All his little antics were so cute. … All that plays a part in it. When you get something that makes you feel good and it makes you feel lighter, … you forget about everything else because your mind is calming and clear.”

“Clean and clear,” she said.