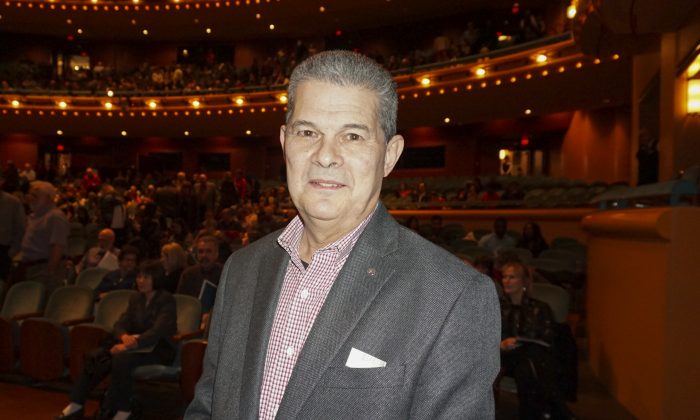 Anthony Richarde at the Shen Yun performance at the Aronoff Center for the Arts on Feb. 27, 2016. (Nancy Ma/Epoch Times)

CINNCINNATI—”We are so impressed. What an experience! … Oh, my gosh, this is tremendous. Everybody in Cincinnati should be here,” said Anthony Richarde after seeing Shen Yun Performing Arts on Feb. 27, at the Aronoff Center for the Arts.

Mr. Richarde has had a love and appreciation for Chinese culture most of his life. He grew up in Lower Manhattan, and living within walking distance of Chinatown, he gained a unique experience.

He’s now been in Cincinnati for over 30 years, has a background in social work and social planning, and currently is an associate director in commercial construction.

Mr. Richarde felt that the dancers of Shen Yun did a tremendous job at using their expressiveness to depict the richness of some of China’s long history and traditions.

The company’s mission, according to Shen Yun’s website, “is to use performing arts to revive the essence of Chinese culture—traditionally considered a divinely inspired civilization. Since the Chinese Communist Party is officially an atheist regime, it is afraid of the freedom of expression this arts company enjoys in the West.”

Mr. Richarde believes that the performers of Shen Yun are very brave for embarking on such a mission, as well as enlightening an American audience to some of China’s struggles, both ancient and contemporary.

“I think it’s important for Americans to understand … to first off appreciate that we have free expression here and then to understand that many people in China can’t be as free and maybe we can be a part of that change—maybe this is part of the change here,” he commented.

Mr. Richarde felt that the overall message being shared was that we should focus less on the material side of things and focus more on the bigger aspects of life including the spiritual.

“I think it reminds you that it’s important to have a spiritual sense of life and how deep inside there are answers to questions,” he said.

Elaborating on that point, he stated, that it’s reflecting “the spiritual side of life, the expressive side of life, and the discipline it takes to be a performer, and again I think that in many ways they’re expressing not just a desire to be creative and to perform, but a desire to educate and try to create change.”

Mr. Richarde was left feeling good and appreciative because such change is difficult.

“I want to tell all my friends to come see the show. It’s great, it’s tremendous, and it’s so entertaining.”